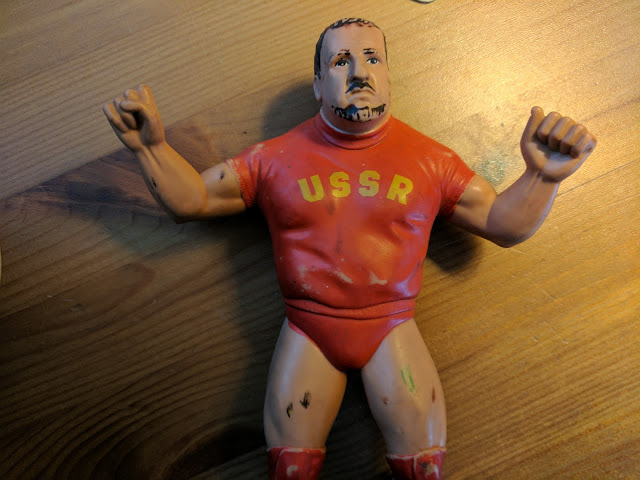 Last Christmas, my parents moved out of their home down in Frankfort that I grew up in and lived all the way through my post-college years.   As part of that move, a bunch of items that my Mom had been 'keeping' for me came out of their attic and closets and ended up at our current place (and some in our storage unit).  Mixed in amongst the youth soccer trophies, press clippings and other artifacts of my childhood were a bunch of my 'wrasslers'.  That guy above - Nikolai Volkoff - is one of them.

These were my most favored toys in my entire childhood.  Like....nothing came close to them.  Until the Sega Genesis.  But before that, these things captivated me like nothing else.  More than Legos, more than even GI Joes.   It was these bendable wrestlers from the WWF.  I had so many of them and loved them.

And now, they're in the mix there amongst my kids toys.  I stick them in with their toys in their rooms.  The King of the Ball Tossers isn't into them yet and the girls always pass them up in favor of some other toys, but I'll keep putting them in the pile and hoping that one day they'll pick them up and have a tussle or two between them.  Never going to happen, right?  That's what I'm thinking (and Nat keeps putting them him on my desk telling me that the kids have no interest!).  Oh well....at least I still love them.  And dudes my age will smile when they see this photo and recall fondly all those days they did a suplex off the top turnbuckle and pinned Brutus the Barber Beefcake or the Iron Shiek with the Hulkster or one of the more rare guys like Bruno Sammartino.
toys vintage toys wrassliin' wwf