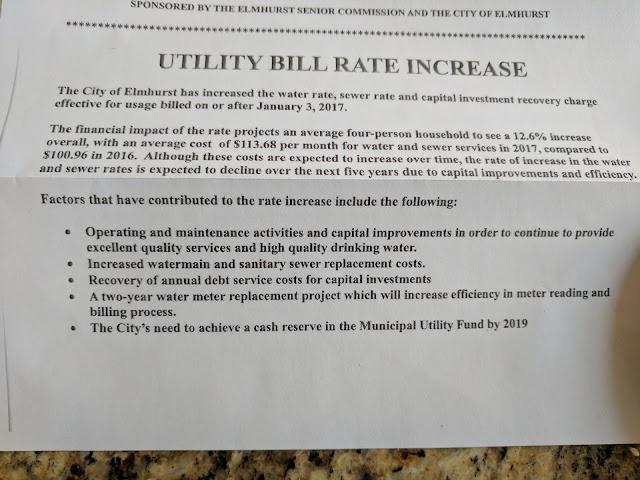 If you live in Elmhurst and opened your utility bill recently, you probably saw this notice in the envelope that calls out the tax increases you're about to be hit with.  They call it a 'Utility Bill Rate Increase', but let's all call it what it is:  Government reaching into your pocket and taking more of your money for no new services.

This increase is a 12.6% increase for this year, but if you read closely, they say that there are EVEN MORE tax increases coming in the next few years.  They say, they *might* not be all the way up to 12.6%, but you can bet they'll be near 10% next year and the year after and the year after.

Don't even get me started with the sewer costs.  How does the City figure your sewer bill?  Welp, they just take the consumption amount of water and charge you that rate for sewer fees.  Even if it all doesn't go down the drain.  Water your grass or garden?  That water isn't going in the sewer is it?  Nope.  Doesn't matter.  The big, hungry, engine that is local government NEEDS your money.  So they charge you sewer charges for that water, too.

Oh, and what's that?  The DuPage Water Commission, which is where Elmhurst gets our water from, announced reduction in the rates they charge the City by 2%.  Did we, the taxpayers see any reduction?  Nope...don't think we did.

What does that mean?  While the price of the water we get costs less than it did in 2014, we're now paying even more.  Figure about a 50% increase in your water and sewer taxes over the next five years.  Why?  Because that's what governments do:  they grow and grow and grow.  All across the suburbs, we end up with these 'Empire Builders' in administrative positions that press our elected officials into a corner on infrastructure improvements.  If there was a slogan for local government it would be:  MOAR!!

Side note:  Give this story a read about local government and infrastructure:  "The real reason your city has no money."

We have some great elected officials in Elmhurst that work hard on our behalf - including our Alderman in the 3rd Ward Dannee Polomsky.  They fight hard for us and represent us well on the City Council.  Dannee - in particular - does a great job of keeping the lines of communication open between her constituents and the local Elmhurst Government.

And, let's be honest:  I don't think anyone elected really *wants* to increase taxes and fees on all of us.

I've been a Village Trustee, so I know the pressure they're under first hand.  I also recognize that the share of the tax bill (despite the median house value in Elmhurst dropped by 25% in the last decade.  Yes...that's true!!) that the City is responsible for is tiny compared to the city and that, technically, the water bill isn't a tax....it is a user fee (one that you HAVE TO USE and can't shop around for competitive rates), but something has to be done to begin to roll back the size and scope of government and I think it starts with taking a hard look at our administrators and their desire to be these "Empire Builders".

Oh, and guess what?  We have a local election on April 4th.  Based on the activity around town, you'd think that we didn't have any issues that matter....because there's no one talking about the races and there doesn't appear to be any campaigns being waged.  That, in of itself, might be part of the problem.
city government city of elmhurst downtown elmhurst government local government property taxes smaller government soapbox taxes water
Location: Elmhurst, IL, USA