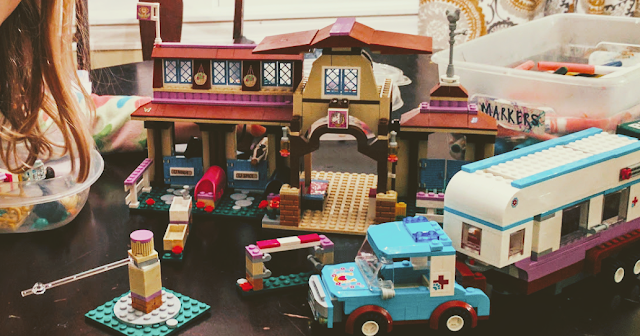 In what seems like the past few months, the pace of adoption of Legos has increased rapidly in our house.  We went from having a tub of Duplos that the girls would occasionally build something with to full-on regular Lego sets in an instant.  You can see some of the Lego-related posts here on the blog.

The Bird - who is younger - has mostly been spending her time with Lego Juniors.  They're a bit easier to build but she still gets to work with 'regular Legos' like her big sister and leave the Duplos to her brother the Beef.

The Babe on the other hand has a total unquenchable thirst for all things Lego.  It started with a few Lego Elves sets.  Then she got a few Disney princess sets (including some for Christmas) and the Millennium Falcon (Squee!) and it just exploded.  (note:  she hasn't built the Falcon yet because she wants to 'wait until her new room is ready so her sister and brother don't wreck it'...)  She's built Ecto 1 and 2 from Ghostbuster's (the car and the motorcycle) and some things from Moana and then turned her attention to the Lego Friends sets.  Here's a link to the Friends sets on the official Lego store.  They're clearly aimed at little girls with the pinks and purples.  And while I could use a little less pink and purple, I do really appreciate that Lego is doing their best to get girls interested in building.   And if it takes a girl-focused set to do that?  Then so be it.

One side note:  My girls haven't quite figured out that they can build WHATEVER THEY WANT.  Meaning...they're still tied to 'sets' and having instruction books.  They get a kick out of building what was designed and spec'd by the Lego designer and they like to set up their work and leave it alone.  We won't be TRUE Lego people until they break up all their pieces and make their own projects out of them, right?

At least that's how I played with Legos when I was a kid.  We lived 'behind' a family that had a boy that was a few years older than me.  Our parents were friends and I was 'friendly' with Chris.  But, because we were pretty far apart in age,  we never really became 'friends'.  He moved away by the time I was in junior high, but before that, I got EVERYTHING that Chris grew out of.  Me being, what they called at the time 'husky' didn't hurt.  Because even though he was a few years older, I followed him close behind in clothes.  Remember those Ron Jon Surf Shops shirts from the 80's?  Yeah...Chris had a few of them.  And he'd actually *been* to whatever warm destination you'd buy those shirts at.  And when he outgrew them, I got them.  So, off I went to school one day in my cool Ron Jon Surf Shop shirt and my teacher asks:  "oh...how was Florida?" I was like "huh?".  And she goes on to explain that my shirt was from Florida.  And that's when I realized that Chris' parents actually went on vacations and he got to go to cool places.  Chris was an only child.  And as such, he had great toys, too.  Legos were part of that equation.

And that brings us back to the story at hand.  My childhood included lots of Legos.  But they weren't sets so much as just 'bags of bricks'.   And that's because Chris got sets.  Built them, broke them up.  Moved on to other cooler toys.  And I was the lucky recipient of his Legos.  They didn't come with instructions.  And they weren't complete.  So, like most kids with Legos, I was left to my own imagination to build something NEW.

My girls?  Nope.  Not going to happen.  The Babe wants it to be perfect.  She's not deviating.

See this set above and below.  It is the Lego Friends Heartlake Riding Club.  Lego Friends made a Heartlake Stables set in the past that is now retired, but just looking at the differences this one is way cooler.

I took these photos after she built this whole thing by herself.  I 'help' from time to time, but I'm just the 'parts guy' who digs through the bowl of loose parts to source for her building the project page-by-page.

This Riding Club came with a few horses and that's what I'm thinking drew her to it.  Her Grammy has been working on her with horses since she was born so once it was built, she demanded that I text a few photos over to her Grammy to show off. 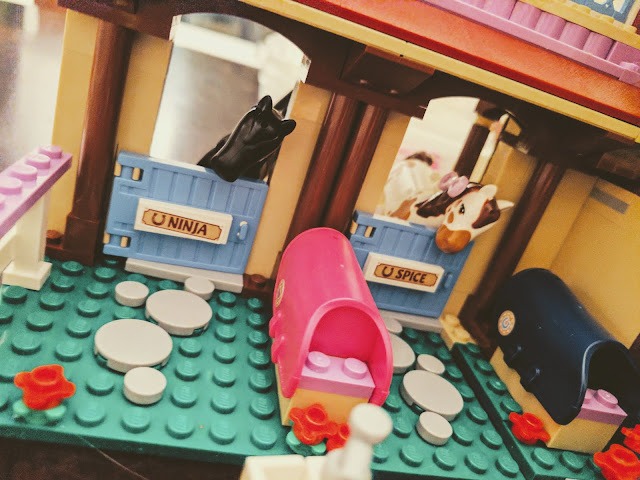 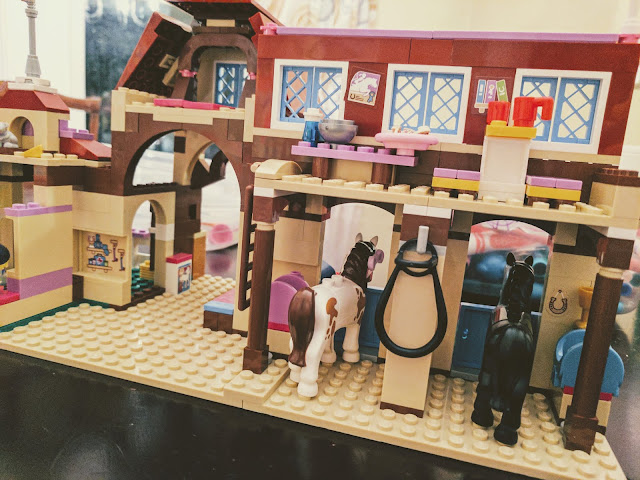