Burny Brothers Bakery: A Glimpse of Elmhurst's Past 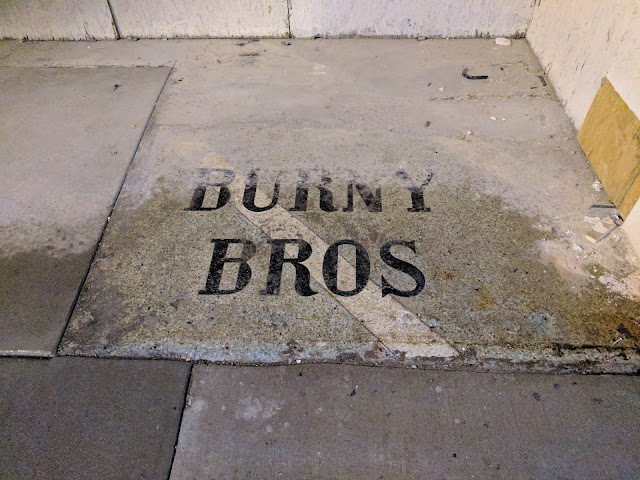 If you walk by the construction site of the new Beerheads Bar on the Northeast corner of First and York in the Elmhurst City Centre, you'll see a bit of progress on the building.  I last posted about the status of the project here on the blog in February.  You can go down the whole rabbit hole of posts related to the site here on the blog.

But, in addition to seeing the exterior construction progress, if you look inside one of the new doorways, you'll also see this - the photo above.

It is a relic from the past.

And was a stonework 'welcome mat' for Burny Brothers.  I had never heard of Burny Brothers, but 'teh Googles' quickly educated me.

From this Burny Brothers archive site:


Burny Brothers Bakery was founded in 1910 in Chicago, Illinois by a working-class immigrant family, and grew to become a successful, uniquely American enterprise. The founding family sold its interest in 1963 to Beatrice Foods Co., which in turn sold the wholesale division in 1976, and in 1979 sold the retail division, brand, and remaining assets to Entenmann's Bakery of New York, at which time the Burny Bros. Bakery/Burny Bakers brand was removed from the retail market.

Now, we know!  Kinda interesting, right?  That we had a retail bakery right at the corner of First and York?  A little over a year ago, I posted this vintage photo from the Elmhurst City Centre in 1975.  Based on the timeline described above, could the Burney Bros bakery be in that photo? I believe it is the storefront that has a black facade on the west side of York, just north of the white storefront at the northeast corner of York and First.

Also, on the Burny Brothers archive site, they've posted a photo of another one of these stone 'welcome mats'.  This one from the corner of Wabash and Van Buren.

Either way, here's hoping that both the developer and the folks at Beerheads are smart enough to try to preserve this relic of the past.  Please say it is so, right?

Can the City of Elmhurst get involved and try to help ensure that this is preserved during the renovation?   I don't love government getting involved in private enterprise, but preserving our past is too important to leave to chance.  Whadya say?  Maybe the folks at the Elmhurst History Museum know the story of Burny Brothers in Elmhurst?
bakery city of elmhurst construction development downtown elmhurst elmhurst elmhurst city center Elmhurst City Centre history preservation real estate real estate. elmhurst relics of the past
Location: W 1st St & E 1st St, Elmhurst, IL 60126, USA