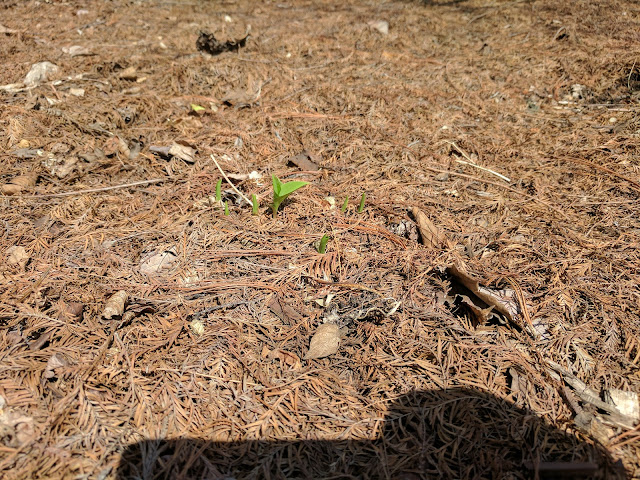 This is the third in a series of posts showing off the foster-care plants that we planted in Nat's Mom's garden over the past few years that she has helped care for while we've been without a yard of our own.  First was the post and photo of the giant hosta that came up for the second year.  Then, yesterday, I posted about the peonies that look to be re-established after a rough first year.

Today, you'll have to look hard at the photo above, but the green shoots sticking out amongst the scattered, dried Bald Cypress leaves/needles, are from our Hosta Venusta.  Last year, at the Elmhurst Garden Club Plant Sale, I picked up a fern and this miniature hosta.  It is billed as being one of the very few miniature hosta varieties that can actually be planted directly in the ground and come back each year.  I've had other miniature hostas before and they've never survived year-over-year - either in the ground or even in a pot that I brought inside our (unheated garage).

But these?  Sure enough, they're back!  Pretty exciting.  They also look to have spread out a bit, so I'm thinking we'll see a bit more coverage than last year and that means that maybe we can divide them earlier than the larger ones and think about getting them started earlier at our new place than the other foster-care plants.
foster plants garden gardening Hostas landscape landscaping naperville plants shade gardens
Location: Naperville, IL, USA