Posted by Jake Parrillo on April 25, 2017
All the way back in early January, I posted for the first time about the salvaged windows we were intending to use in our new old farmhouse.  You can see them in their original state here.  There is a pair of square-ish windows for use in one of the rooms and this large, horizontal-oriented transom that was destined to go in our front hall vestibule.

In early March, I shared a photo of some of the window sashes that were removed.  We dropped them off at Drebohl Art Glass in Chicago to be fixed and preserved.  As part of that process, we had our builder strip the sashes off all three, sand them down to be smooth and then prime them with a white primer before bringing them back to the guys at Drebohl Art Glass for the final assembly.

As the house progress continues, one of the trades that is moving along is the trim carpenter.  We didn't want these windows just laying around the jobsite because of their delicate state, so as part of his work, he moved ahead with installing the transom in it's final location.  How's it look?  Just about perfect. 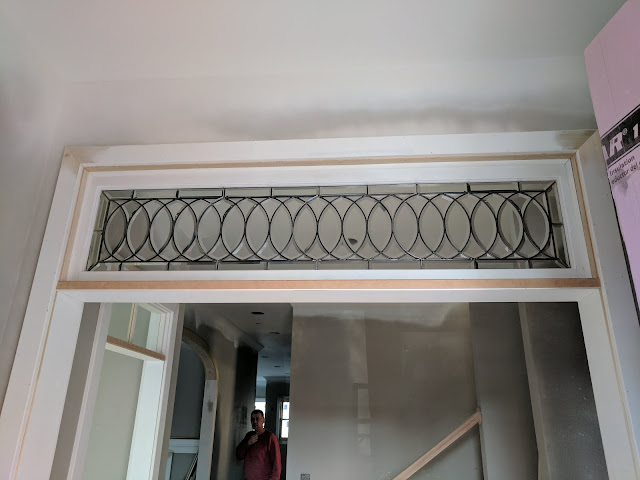 Love how it looks installed and love how it helps complete the story of the vestibule.  Between the flooring, the size/location of the space and this transom, I think we're going to have a great story for people as they enter our new old farmhouse.
#newoldfarmhouse art glass building a farmhouse house salvage leaded glass new old house transom windows vintage vintage house parts vintage windows
Location: Downers Grove, IL, USA