School Boards And Their Insatiable Appetite for MOAR 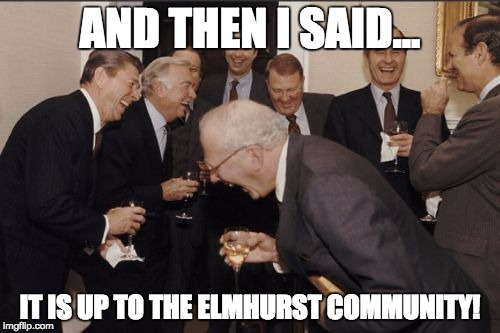 In today's Daily Herald, Robert Sanchez covers Elmhurst School District 205 and their facilities.  It appears that the School Board is going to come to the taxpayers soon and ask for even more money.

Elmhurst Unit District 205 has released preliminary cost estimates for up to $151 million in building projects that could be included in a future referendum question.

That's $33M more EVERY YEAR in spending for the schools.  Did Elmhurst grow over that period of time?  The answer is no.  But the tax bill for the schools and their pensions sure did.

And what did the average Elmhurst property owner get during that same period of time?  A 25% decrease in their property values.  Source.  (Elmhurst Schools aren't the only ones increasing taxes.  The City of Elmhurst just passed along a massive increase in our water bills this Spring.)

If you read the Daily Herald story, you can easily come to the conclusion that something is wrong with their processes.   They're calling it a 'conversation with the community', but that sounds very much like a 'listening tour' that prospective political candidates go on before they announce.  We can all see through the ruse.  This 'conversation' is going to end up with one pre-determined outcome:  more spending.

It seems that the School Board and the Superintendent either failed to plan for facility improvements over time and their just simply aren't any cuts to be made and that the ONLY options forward is either:  deteriorating buildings or having all of us pay more every year.  There's nothing they can cut or do on their end to solve the problem that would allow them to live within their means today or in the future.

When you know your roof has just a few more years in it's life, what do you do?  Start to plan to replace it by saving money to cover the cost, right?  That's now what the schools do.

Instead, they're going to 'ask' the community for 'approval' of $150M in a referendum to build new buildings.

But, the crazy part?  The School Board President had this to say:


School board President Shannon Ebner acknowledged that it's "really not up to the board" to decide what happens.

"It's up to the community," she said. "I don't have an opinion. We need to get approval from the people of Elmhurst."

The school board President said that she doesn't have an opinion.

Listen, being an elected official is hard.  I get that.  But, this is nuts.

We elect people to represent us. Then they say that they don't have opinions and hide behind the notion that the 'community' gets to decide? Really? Umm...what about having an opinion to NOT continue to ask for more and more and more taxes from the 'community'?  Wouldn't that be a good 'opinion' to have?

Also, isn't it the board who decides which questions to put on the ballot?

We've seen this before.  School board decides to put a question on the ballot to build new schools.  Construction companies and consultants and teacher's unions all pony up to fund a 'vote yes' campaign.  Special interests can smell an opportunity, right?

The other issue in Elmhurst schools appears to be school classroom size.  There are a few, strong arguments that the class size issue needs to be addressed.  The science there is clear.  Smaller classes *are* better.  And it is important to speak up about it.

It isn't just in Elmhurst, either.  In Downers Grove, the school board and administration see their gravy train running out when their bonds expire in 2019.  So, they're already hatching plans to figure out a way to 'extend' them/replace them while trying to tell the taxpayers that 'hey...you're already paying this.  We just want to keep it and maybe, just maybe, raise it a bit."

Again, I know being an elected official is hard.  You want to make the right decisions and it isn't always easy to be for 'no' or for talking about cuts.  I also know that I don't have the full stories on any of these issues.  I haven't attended meetings.  I haven't talked with the boards.  I just can share what I've read.

I thought that perhaps the past Presidential election would have fired up people to take back their local governments and get involved.  But, if you went out and cast your vote in this Spring's elections, you probably found like me that there weren't any choices.  Most of the races were uncontested.

I guess this is what we get when we don't have choices.  We get elected officials who profess to not have an 'opinion' on issues like $150M tax increase.
elections elmhurst elmhurst schools local government property taxes referendums school board schools taxes
Location: 162 S York St, Elmhurst, IL 60126, USA