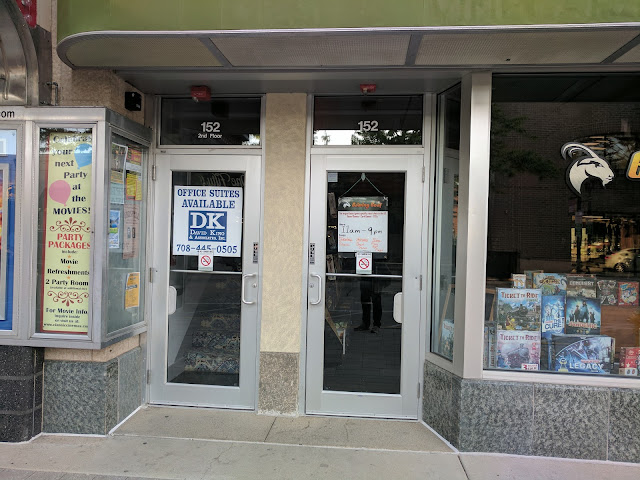 Earlier this week on my walk to the train, I noticed this "Office Suites Available" sign at 152 York Street - right sandwiched between the Gaming Goat and the York Theatre.   The door leads to a 2nd floor suite that used to be occupied by the Theatre Historical Society of America.  Yeah...the Elmhurst City Centre used to be home to them.  And they were tucked away in a 2nd floor suite above the York Theatre.  But, now they're gone.

Turns out, last summer, news broke that the group was moving to Pittsburgh.   Somehow, I missed all of this.  And that, right there, might have been the problem.  We just weren't paying attention:


After more than two decades in Elmhurst, the Theater Historical Society has decided to move its headquarters to Pittsburgh.

In a newsletter published on the organization’s website, the board of directors said the move is motivated mostly by the space limitations of their location above the York Theater, 150 N. York St., in downtown Elmhurst.

They also pointed out that Elmhurst didn't appear compatible with their future vision for the organization.


Besides space concerns, the Theatre Historical Society newsletter also said Elmhurst does not satisfy the society’s plan for the future.

“We must find a place where we can grow, where we will be visible, and where we will be able to put a good face forward as we carry out our mission of celebrating America’s theaters and educating the public about their history,” the newsletter stated.

According to information about the move provided on the society’s website, Pittsburgh was chosen as the new home of the Theater Historical Society because the organization will be “a much larger fish in a smaller pond.”

Smaller pond?  They must be referring to the greater Chicago area vs. Elmhurst specifically, right?  I mean...I don't think there's anybody comparing Elmhurst to Pittsburgh, are they?  I suppose,  we *do* have a vibrant museum/cultural scene with the EAM, the Lizzadro, Elmhurst History Museum, Elmhurst College and the Wilder Park Conservatory.  But, that can't be what they were talking about, right?

Have to say that I think this is a pretty sad sign all around.  Sad that this unique group left town and sadder that I barely noticed.  I try to pay attention to things around town, but there are obviously things that happen without people noticing - like this.  Did the City of Elmhurst try to intervene to see if they could keep the place in town?  I'm not one for government giving handouts, but isn't there a precedent of the local City government helping sustain museums and cultural destinations in town?

Regarding just noticing this place and their vacant office location in the City Centre.

Did you guys all know that the Theatre Historical Society of America moved out of Elmhurst?  Sounds like they really upgraded their situation:  hooked up with the Heinz History Center and the Smithsonian Museum and even what sounds like a true museum footprint.

So long, Theatre Historical Society of America.  I hardly knew you.