Join, or Die - At The Logan in Philly 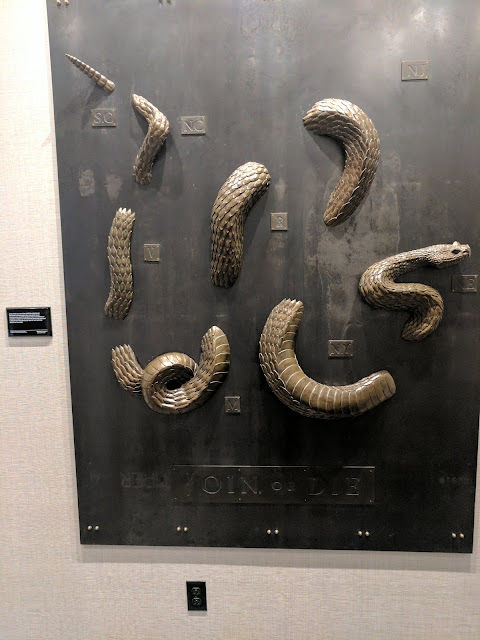 Earlier this Summer, I found myself in Philadelphia for a few days.  I posted about the beer I drank while waiting for my delayed flight home and the not-so-great steak I had at the airport, too.   I stayed at a placed called The Logan that had quite a collection of art around the place.  In the areas by the elevators on my floor, down the hallways and in various places around the lobby were mixed media, paintings, sculptures and more.  They're pretty proud of the art and it seems to be a big part of the hotel's personality.  Here's the page showing off a bunch of it on the hotel's site.

The piece that I took a photo of above is called - of course - "Join, or Die".  Here's a look at the little plaque to the left of the piece.  It is right across from the main elevators and one of the more prominent pieces. 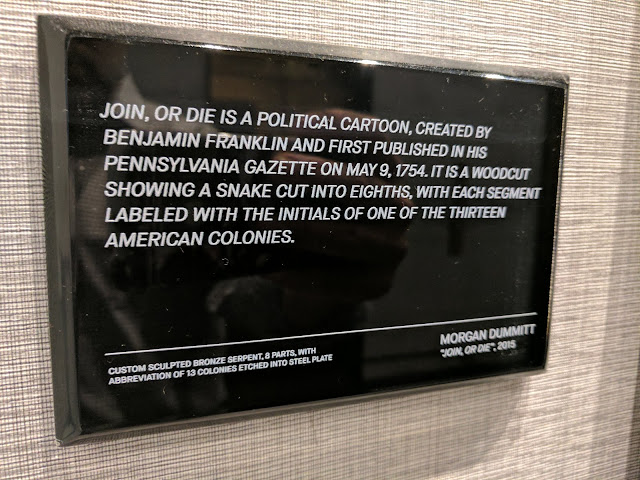 The description from the Logan's site:


“Join, or Die” is a well-known political cartoon, created by Benjamin Franklin and first published in his Pennsylvania Gazette on May 9, 1754. It is a woodcut showing a snake cut into eighths, with each segment labeled with the initials of one of the thirteen American colonies. Pennsylvania is represented in the center with an "R", a typo in the original 1754 print. Franklin's purpose for the original cartoon was to encourage the colonists to join together with Great Britain in the Seven Years War. Ironically, the cartoon was used again decades later against the British in the American Revolutionary War.

This one struck me and sent me down a rabbit's hole about snakes and flags and American history.  You can start with this entry on the Gadsden Flag which covers the 'Join, or Die' piece by Ben Franklin.

By the way....my natural inclination is to call it "Philly".  But, is that kinda like how people that live in Ohio call it "Chi-Town"?
art Ben Franklin Don't Tread on Me hotels Join or Die Philadelphia Philly snakes
Location: 1 Logan Square, Philadelphia, PA 19103, USA