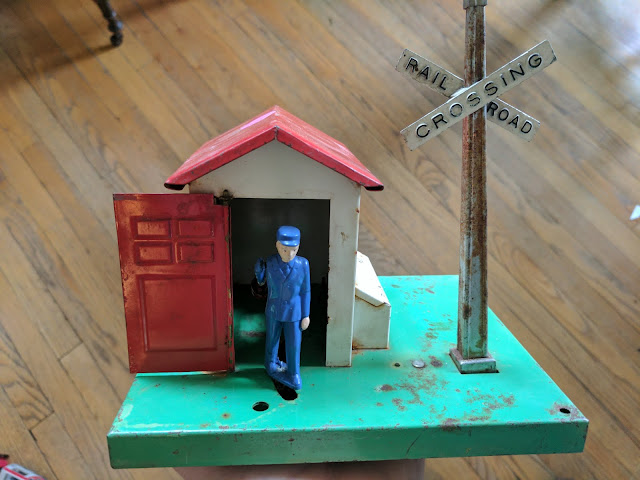 Day three of showing off the various treasures from the Elkhart Antique Flea Market up in Wisconsin that we scooped up during our visit in May.  First there was the chandelier that Nat scored from these two sweet gentlemen.  Then there was the Schlitz beer glass pitcher.  And then yesterday was the vintage Santa and Mrs. Claus salt and pepper shaker sitting on a cute bench.  The last of the treasures is this Lionel Gateman accessory - item number 45N.  It is destined as a Father's Day gift for my Dad who is the original model train guy in our family.  He runs his early 1940's train set from his childhood and has a handful of vintage accessories.

This one was cheap - the guy took my $5 offer - and because it doesn't come with the box is probably priced close to right.  The reason?  There just aren't that many guys who want to buy vintage trains these days, right?  They either have them or they're gone.  I think that is driving the prices down a bit on vintage Lionel these days.  There isn't tremendous demand for common parts like this one.   The good news is that the mechanics on this 45N Gateman are super simple and because I fidgeted with his arm, I know it will WORK when wired up.

Here's a photo of the bottom which shows the item number 45N.  And that tells a story. 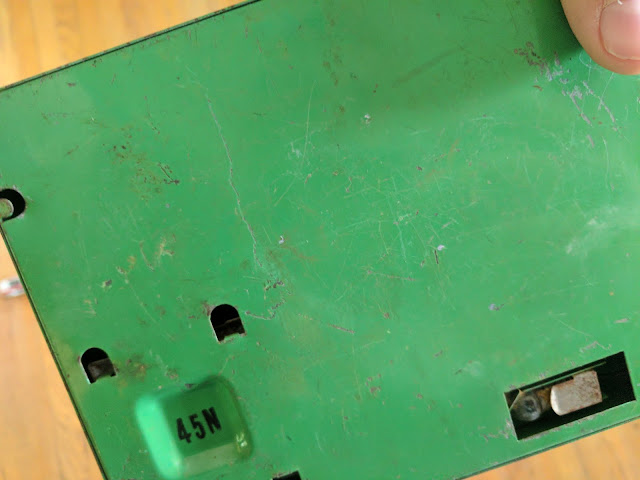 
The postwar 45 Operating Gateman accessory is a carry-over item from Lionel's prewar era. Originally introduced in 1937 under the number 45N, this all-metal accessory has become a staple on many layouts. Beginning in 1950, the infamous 145 Operating Gateman was created, which is a slightly smaller and more scale-like gateman, but was based upon the postwar 45 gateman. In either appearance, the gateman has become one of Lionel most popular accessory. The 45 Gateman is a reliable accessory and is popular with both operators and collectors.