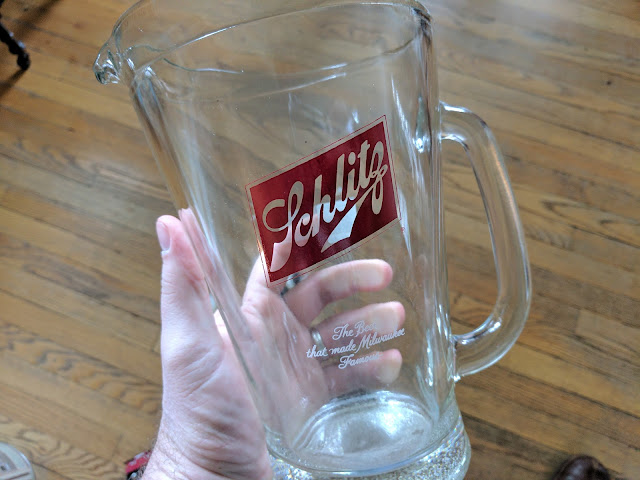 Last week, I posted about our experience at the Elkhart Antique and Flea Market up in Wisconsin and how we scored a few items including a chandelier for our #newoldfarmhouse.  One of the other items I picked up was this beauty of a glass pitcher from Schlitz.  It has "The Beer that made Milwaukee Famous" written in a cute script and was a steal at just $5.00.  We were walking out and I was carrying - gingerly - the light fixture that Nat had scored in a box and it was awkward.  So, about every 100 yards or so, I had to put it down and re-adjust my hands on it.

One of those stops happened to be in front of a booth where the guy was packing up.  He had this pitcher on the table.  I picked it up, turned it around and looked at the price.  $15.  I set it back down and said.... "nice pitcher".  But it was too much for me.  The guy practically begged me to buy it.  He said it was a rough day for him and that he'd take anything for it.  I hemmed and hawed and finally said..."how about five?".  SOLD!

I've eyed one of these Schlitz glass pitchers before.  Here's a post from last summer when I came across a pitcher that they were asking $12 for up in Michigan.  I passed on it then, too.  But said this:


We don't have a house, let alone a place to put big glass pitchers like this, but if it is still around when we go back, I think I might grab this to start our barware collection that could reside in a potential butler's pantry.

That time is almost here.

And since I've been documenting 'the ones that got away' in my treasure hunting, it seems like this is the first time that I've had some redemption and came around to scoring the item on a second chance.
#newoldfarmhouse beer Elkhorn Antique Flea Market flea market milwaukee pitchers schlitz treasure redemption vintage glasses
Location: 411 E Court St, Elkhorn, WI 53121, USA