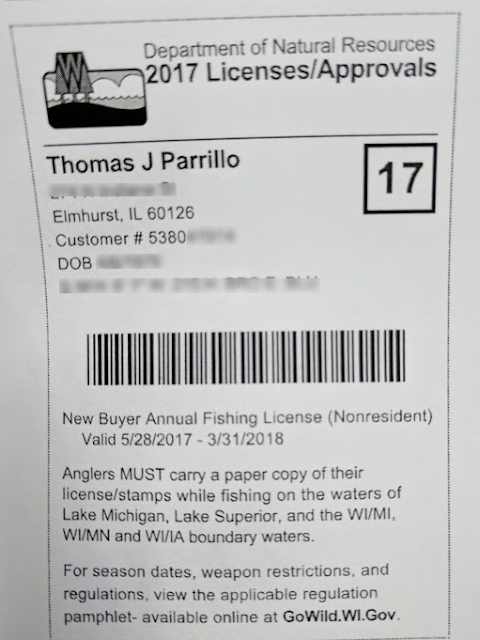 We're now all set up with fishing rod and a little tackle box up.  We went off to Walmart and came home with a few little poles (for the two younger kids) and an intermediate one for the Babe and I even bought my own rod.  When we were picking out the equipment the lady at Walmart was very helpful and encouraged me to get a license.  After answering a handful of questions, she printed out this barcode license that says that we are supposed to carry this with us when we fish.  We didn't buy any stamps because, well, we're just beginners and we're catching a lot of little things and tossing them back.

The Babe has had the most luck of the bunch.  She throws her line in - usually with a wax worm on the hook - and most sessions, she pulls out a fish.  A lot of panfish (bluegills) and a few bass (not sure if they're large-mouth or small-mouth...again....we're beginners!) so far.  The King of the Ball Tossers is currently using a casting practice weight.  One of these training lures that is a fish-shaped sponge.  The Bird has a little hook that I put a waxworm (because they're a little cleaner than earthworms) and she's caught a couple of fish, too.

I have a few memories of fishing with my Dad when I was growing up, but as I grew up, I seemed to be drawn to watersports more than angling up in Coloma.  The most recent fishing I participated in was smelt fishing in Montrose Harbor.  Here's a post from back in the day.  But, for me...Waverunners and water skiing were where I spent my time on Paw Paw Lake, so it is like I am just learning how to fish as we go.  That's kind of nice.  And, as it would happen, the first time I cast my line on my new rod, I snagged a little panfish right away.  Of course I did.  The fishing Gods know what they're doing, right?  (Hey!  Look, guys.  We have a guy here that we can suck in!  Great...I'm on it.  Let's give him a little bluegill and he'll get a rush and keep coming back.  Done. And done.)

Now, each morning that we wake up in Wisconsin, the first thing that all three kids want to do now is to put on their life jackets, get the rods out and 'go fishing'.  I think they're 'hooked', as it were.
DNR fishing fishing license kids lake elizabeth license twin lakes walmart wisconsin worms