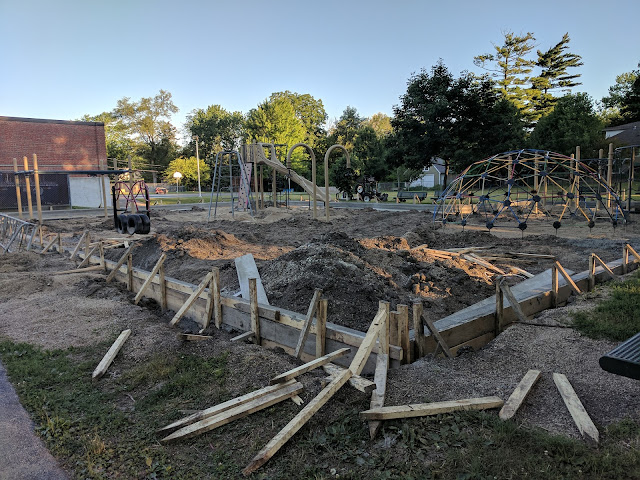 If you walk by (or drive by) the playground outside of Whittier Elementary School on Grand Avenue, you'll see a bit of a construction site taking place on the playground area.  When I snapped this photo, there were concrete forms set up and a new perimeter curb was being poured and set.  They had also dug up quite a bit of earth in what looks like a perfectly-timed summer project for the school.

I poked around a bit and it turns out that this is a major project that has taken five years to ideate and fund and now they're moving on to the construction phase.  From the Downers Grove District 58 site:


Over the years, Whittier’s playground has received regular safety maintenance and minor changes, such as the removal of the teeter-totters. However, the playground itself is decades old and was built when Whittier’s enrollment was half its current size.

This discovery prompted the moms and Whittier PTA to launch a four-year planning and fundraising effort to upgrade Whittier’s primary playground. They requested and received support from the Board of Education, District leaders and Whittier parents.

They collaborated with the community, including children, to determine the best design for the playground.

The PTA intends the new playground to provide traditional playground equipment as well as new physical challenges and activities for children to enjoy. The Committee spent two years researching the playground’s concept and determining a budget.

They spent another two years fundraising for the $100,000 needed, through their Savers drive, Rotary Fest chocolate sale, Penny Wars, Whittier spring fundraiser and other activities.

“It’s been a long road of research, planning and fundraising but after about five years we think we’ve hit our goal,” McGinn said. “Our hope is the playground will be replaced in the summer of 2017.”

So, kudos to the Whittier PTA for taking the initiative and for funding the project with private dollars.  A great example of public/private partnership.

The Whittier School PTA has their own site up with details and such about the playground.  Check it out here.  They're still raising money, so if you are interested, you can donate online to help fund the playground.

On the PTA's site, you can also see the proposed design.  I've pasted their image below. 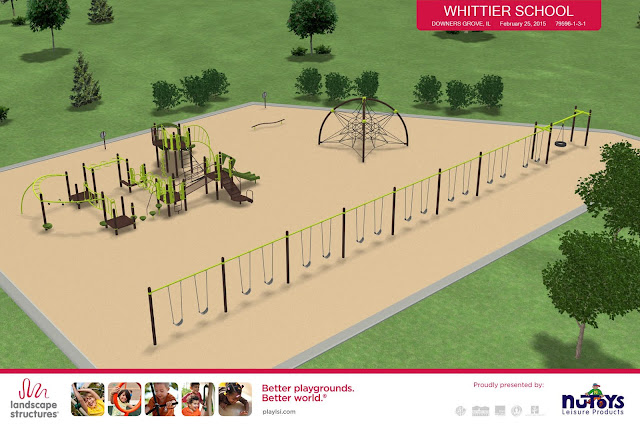 That's quite A LOT of swings, isn't it?  Based on this rendering, it appears that ALL of the existing equipment will be removed and totally replaced with new, modern playground fixtures.  Pretty great to see this come to life and to be funded totally by private dollars.

We're pretty close to Whittier School now, so I'll try to update the progress the new playground is making over the summer.