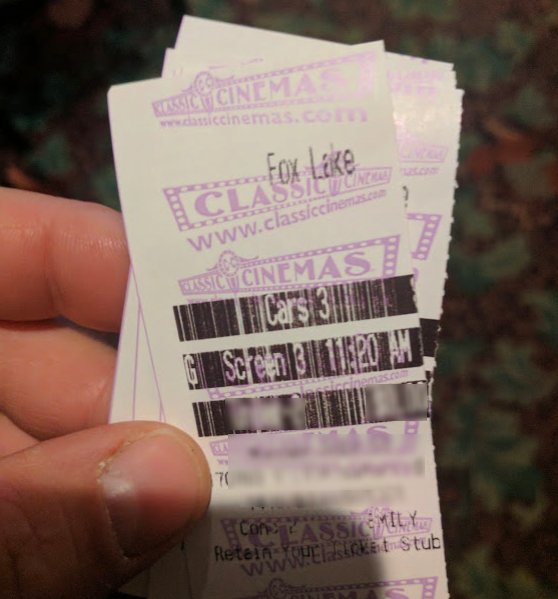 Recently, we checked out the new (to us) Classic Cinemas theatre in Fox Lake.  We've come to really love Classic Cinemas based on living so close to the York Theatre in Elmhurst.  They run a first-class operation.  And...the kids popcorn/fruit snacks/icee boxes and booster seats don't hurt one bit.  Not to mention the free refills on corn/soda and the rewards program.

One morning while it was raining up in Wisconsin, we decided to head to see the new Cars 3 movie and instead of going up to the multiplex in Lake Geneva, we decided to drive down to Fox Lake to give the Classic Cinemas Fox Lake a try.  It wasn't what I was expecting.  But it was great!  Based on seeing what Shirley and Willis Johnson have done to the York in Elmhurst and the Tivoli in Downers Grove, I was expecting an old, downtown movie palace.   Instead, the theatre was kind of tucked in the corner of a stip mall about a block or two off "main street" next to a hardware store.  Turns out, that's because the theatre isn't old.  It lived a previous life.  From the Classic Cinemas site:

During the winter of 1993/94 Willis and Shirley Johnson met with developer Dwight Yackley to look at the Lakeland Shopping Center as a possible site for a movie theatre. After a review of the buildings, it was decided that the space that had formerly been occupied by a grocery store, would be more suited to a movie theatre due to its higher ceilings. It was decided to develop the space into five auditoriums with restrooms, an office and storage areas.

They've since added four more screens and now have nine theatres.  There was no organist like at the Tivoli or the York, but felt enough 'like' Classic Cinemas to make me want to go back next time we're looking for something to do in the rain.
Cars 3 Cars movie classic cinemas fox lake movie theaters movie theatres Shirley and Willis Johnson theatres Tivoli Theatre york theatre
Location: 115 Towne Centre Lane, Fox Lake, IL 60020, USA