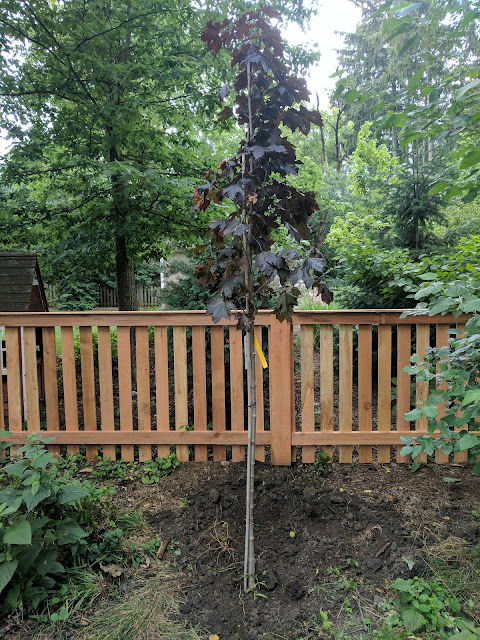 Another tree?  Yep.  This makes number nine.  Nine trees planted this season in the yard.

There's 2 flowering pears, 1 Japanese flowering cherry, 2 Lindens, 1 Dawn Redwood, a Magnolia, a Corkscrew Willow and now this one: A Crimson King Norway Maple.  And let me get this out of the way.  Yes, I know some folks wouldn't recommend this tree.  But I've been drawn to them for a while and I wanted something that would break up the sea of greenness in the very far reaches of the rear of the new old backyard.

Menards has marked their trees down to 30% to 50% off, so this one was a no-brainer for me.  I brought it home and found a spot along the fenceline all the way in the back.  We haven't quite gotten around to cleaning out most of the weeds/brush areas around the perimeter of the lot, so this is - for now - mixed in amongst some native weeds and various, unidentified brush.

Now, back to the tree.  If you're looking to find out why some folks have maligned this tree, check out this post from the University of Arkansas Division of Agriculture.  It is a Norway Maple which you'll find on A LOT of parkways around the suburbs.  We had one at our old place in Elmhurst that was ravaged by lightning that we cabled-and-rodded to save it.  It is still standing today.

The Crimson King, though has a dark maroon leaf.  It isn't particularly showy during the fall, but it provides quite a bit of contrast through the Spring and Summer with it's dark red foliage.

The one we bought is a 1" caliper and because this isn't a super fast growing tree, it will take some time to mature and leaf out before it starts to show off. 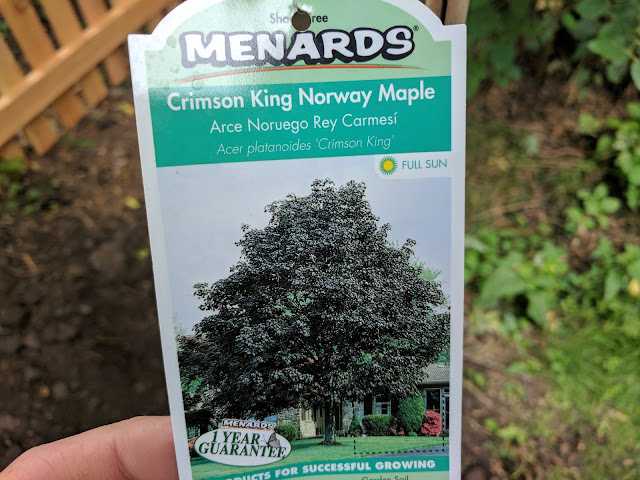 So...nine trees.  Two of them are in the front.  The other seven are all scattered around the #newoldbackyard.  In talking with the landscaper, we actually have plans for quite a few more along one particular spot that I'd like to provide some screening, but the seven we planted weren't part of a specific plan.

Rather, they were just me thinking that we're playing a long game here.  We intend to live in the #newoldfarmhouse for quite some time.  And, while right now we have a bunch of mature trees (some good, some not so great), time is on our side.  Meaning, I know we'll lose trees over time.  But, if we put some of these trees in right away, they'll grow faster.  And that means they'll get closer to being mature in a few years.  And, if we do it right, we'll transition easily from mature to mature trees while adding interest, variety and quality.

This paragraph on AwaytoGarden.com got my attention:


As many beginners do, I created my garden backwards: planting herbaceous things first and trees and shrubs later, when their different time to maturity would have made the opposite strategy smarter. Worst of all, I forgot conifers almost entirely in those first years.

All of the trees we've put out are deciduous trees, so next Spring, I have eyes on finding homes for a few conifers.  Adding some year-around interest and color that we can see from the house is important and based on the plantings this year, we've left some perfect spots for the right ones.  (I'm looking at you Canadian Hemlock and Weeping Cedar.)

Nat will tell me when to stop at some point, right?  Maybe when we run out of room.  Or, I move on to building that backyard pizza oven I've been dreaming about for years, right?
#newoldbackyard arboretum backyard Crimson King Maple tree landscape maple trees menards trees