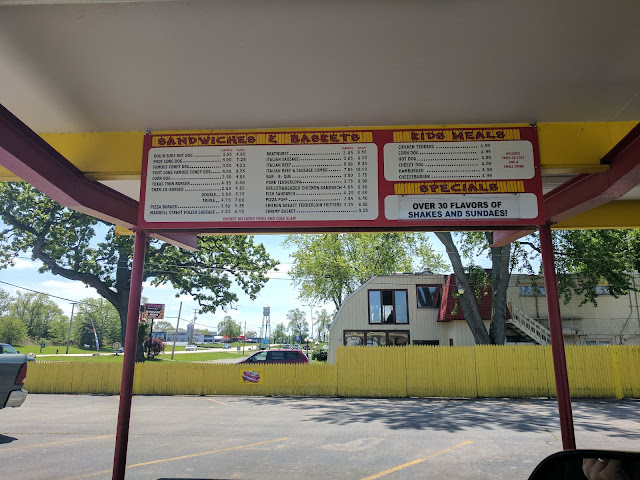 Right on the Stateline is a town called Richmond, Illinois.  To get to Twin Lakes, you drive through Richmond.  There's a McDonalds.  An Ace Hardware.  And a couple of flea markets.  But there's also a Dog n Suds.  And we, of course, had to give it a try.   I had a boss back in the day that appreciated a Dog n Suds and we stopped when we came across one.

This one in Richmond is trying to stay true to the original.  From their site:


Richmond Dog n Suds was opened in 1963 by a local family and has always been a small family owned business. The restaurant was sold in the fall of 2005 to another Richmond family, with a strong commitment to food quality, friendly service, and the determination to retain the nostalgic atmosphere which made this Drive In such a success.

After 2005, they refurbished the interior and exterior of the business paying close attention to architectural standards used in 1963. They also added many new events. Look for Live Music, Cruise Nights, and many specials designed for the whole family to enjoy a pleasant change from today’s interpretation of fast food dining.

In 2014, the Richmond Dog N Suds was sold to a new, young and motivated owner who is dedicated to keeping the Dog N Suds name and atmosphere alive.

I pulled up to one of the spots and a carhop came out (not on skates!) and took our order.

Place looks like you'd expect it.  Lots of yellow.  Check out that fence in the photo above.

I've covered a few other places in Richmond like Anderson's Candy Shop and talked about a 'routine' that we established up in Coloma that it seems we're beginning to establish in Twin Lakes.  From the things we buy to the items we eat to the places we go.  Dog n Suds might end up in that rotation, I would think.

We didn't eat in the car, but rather took it home for the kids.  How was it?  Not awesome.  But, I blame myself.  Got far too cute with my order and veer'd too far away from a dog and a rootbeer.  Next time, I'll stick with the basics.