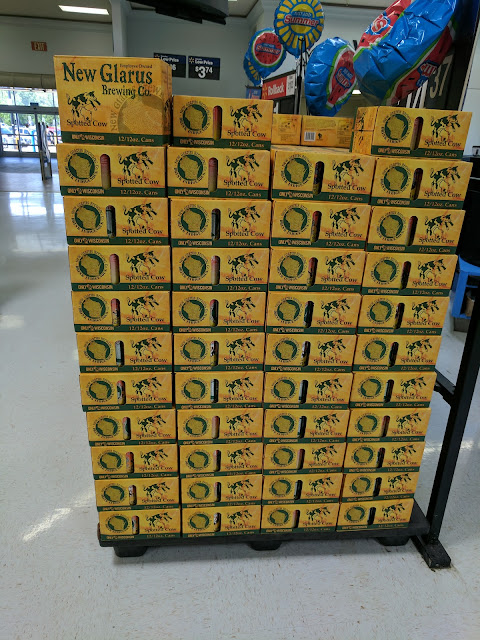 I tend to do most of my shopping up in Wisconsin at Walmart.  Nat isn't a fan, so most of the time, the trips I make there are with just some of the kids.  We buy fishing gear, groceries (including turkey for grilled turkey and cheeses) and other lakehouse what-have-yous.  On one of my recent trips, I came across this huge pallet of New Glarus Spotted Cow 12 packs of cans right by the 'greeter'.  Interesting to see this craft beer being sold in Walmart, isn't it?

Having recently read this piece about New Glarus planned expansion, this got me thinking.  From BrewBound:


New Glarus Brewing Co. is adding 16 fermentation tanks that will eventually allow the Wisconsin brewery to double its annual capacity to more than 400,000 barrels.

The German manufactured tanks, each capable of holding about 580 barrels of beer, arrived via boat in Milwaukee earlier this week.

Carey had hoped the tanks would be operational for a busy summer selling season, but the additional fermentation space won’t officially come online until next year.

Even when they do, the chances of expanded distribution to out-of-state markets remains remote, Carey said. She stressed that New Glarus refuses to play an “ego game of bragging about a distribution thumbprint or footprint,” and that the cellar expansion is aimed at improving the availability of quality beer.

“I think it’s such an absolutely ego driven conversation,” she said. “It’s not how we think and how we operate. This is just to take care of Wisconsin.”

The thirst for New Glarus beer within Wisconsin has proven hard enough to satiate. Carey told Brewbound that her brewery is currently dealing with out-of-stock issues.
“We’re totally out of 12-packs [of bottles],” she said.

New Glarus — which was founded in 1993 and is now ranked by the BA as the sixteenth largest U.S. craft brewery — grew about 10 percent in 2016. The company is anticipating similar growth of about 10 percent in 2017, Carey added.
Through the first half of this year, sales of the brewery’s flagship, Spotted Cow farmhouse ale, are up 10 percent while Moon Man pale ale sales are up 30 percent. And while some craft breweries have struggled to grow their seasonal brands, sales of New Glarus’ offerings are up 40 percent, Carey said.

They're the 16th largest craft brewery and they're NOT interested in growing their distribution footprint, while seemingly happy to serve the beer-drinking population of Wisconsin.  Amazing.  And, with Spotted Cow being sold in Walmart?  They certainly are serving the masses.  (Although...this *is* the Lake Geneva Walmart, so it isn't exactly slummin' it, right??)

While we *do* love Spotted Cow - and the fact that it is in cans, so it is lake/dock/deck/kid friendly - but reading the story about Deb Carey's approach to business makes me an even bigger fan.
beer craft beer Deb Carey Lake Geneva New Glarus spotted cow walmart wisconsin
Location: 201 Edwards Blvd, Lake Geneva, WI 53147, USA