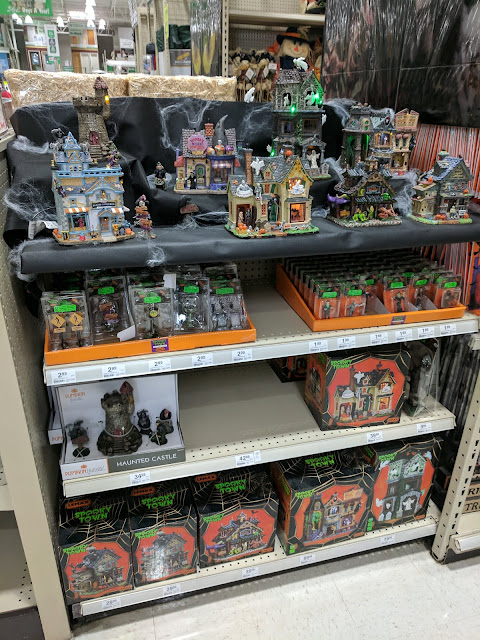 This past weekend marked the turning of the Menards seasonal store inventory over from Summer/back-to-school to Halloween stuff.  And it is the beginning of the most wonderful time of the year!  I've chronicled this transition to Halloween in years past including 2016 here.  2015 here.  And 2012 is here.

Now that we've moved to Downers Grove, we don't have a Menards super close any longer - but we have two (Bolingbrook and Glendale Heights) that are the same 15 or 20 minute drive away.  The photo I took above is from Bolingbrook - which is an older-style store.  But their Halloween section is pretty robust and goes well beyond this Halloween Village set-up from Lemax.  Blowmolds and inflatables?  They have a bunch of them including a blinking-eye owl that I have my eye on.   Our new neighbors are going to love the Inflatable City, aren't they?  In Elmhurst, Nat was totally fine with inflatables in the backyard, but drew the line at the front of the house.  Guessing we'll follow the same protocols at the #newoldfarmhouse.