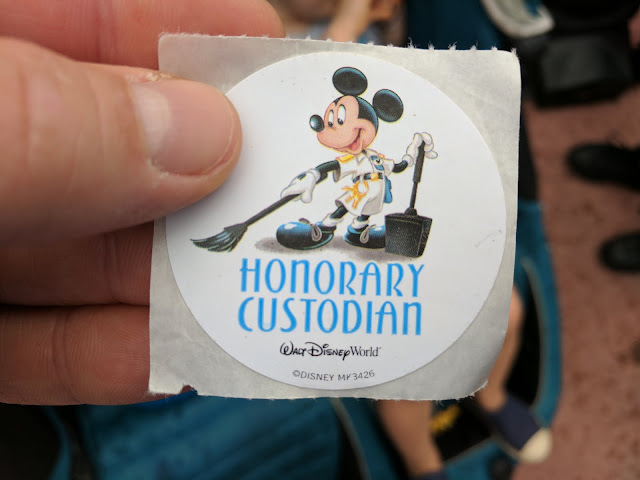 Here's another fun little thing that the King of the Ball Tossers (KotBT) picked up when we were down last time at Walt Disney World.  Earlier this week, I posted a photo of a new Transportation Card we picked up on the Friendship IV.  We were in one of the parks and stopped somewhere eating popcorn out of one of those buckets that they sell you for $10 and give you $1.50 refills (best deal at WDW, amirite?!?!) and we must have dropped something like a paper cup.  The boy got out of the stroller and went over and picked it up and carried it to the garbage can and put it right in.  A Disney Cast Member in custodial must have been watching him and after he came back to the stroller, she came over and said "Hey!  Thanks for the help Little Buddy!"  And peeled off this sticker and handed it out.  The KotBT smiled big at her and took the sticker.  He shyly - as he usually does - buried his head into the side of the stroller.  I thanked her and we moved on.  A minute later, he raised his hand and showed off the sticker.  He was so proud!

We know that Disney World trips aren't cheap.  And people are always looking for things that they can add that aren't going to cost even more money.  There's a bunch of stuff below that we've picked up that doesn't cost any money.  This one?  Not sure how you get one, but I'm guessing you can just go up and ask a Cast Member if they have one of these?  Or, just pick up your garbage and do your part and who knows??? You might get lucky!