Fountain Grasses Destined For The #NewOldBackyard 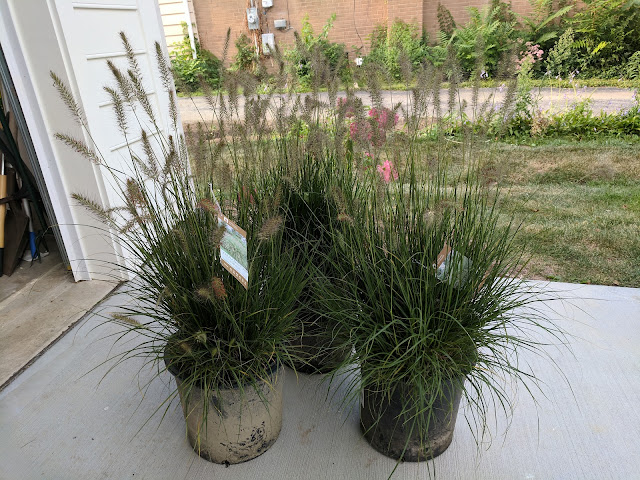 Nat picked up these three fountain grasses (pennisetum alopecuroides 'hameln') at Costco of all places.  They were priced right, so after she texted me a few photos of the various varieties (including a variegated version), we ended up with the three pots you see above.   According to the Missouri Botanical Garden, these are a particular hardy variety that seem to be able to be planted pretty much anywhere.

Over the weekend, I dragged each of the pots to the backyard and placed them in a spot where I thought they'd look good.  Then I walked back to the patio to take a peek from that view.  Didn't love the first layout.  Nor the second.  Nor the third.    I ended up laying them out to form a sort of hedge along the fenceline, near one of the rear gates.  The issue is that our beds in the back are totally undefined at this point.  So, by placing these things, we begin to define at least part of them future of the beds for the #newoldbackyard.  So, while I've transplanted grasses in the past and know that I can ultimately transplant these, it seems like there's a lot resting on the placement of these.

I was weighing planting them closer to the house because grasses have all-season appeal.  That is, according to the tags that came on them below: 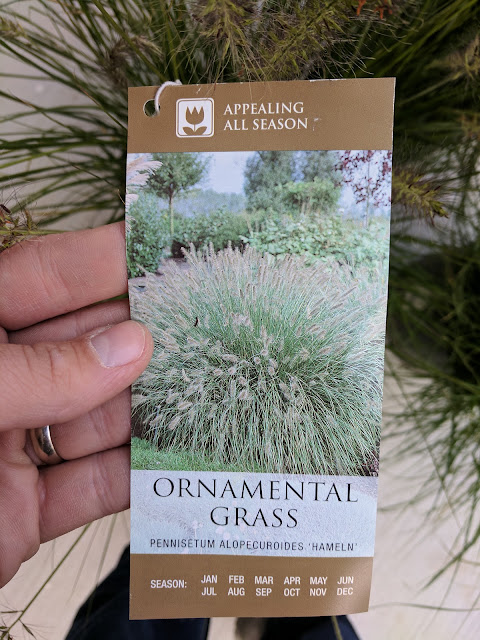 All jokes aside, they *do* have winter appeal in that they will have some interest all year long, so the placement of somewhere that they can be viewed from the inside of our house *was* a consideration.

We've added some trees and I even recently posted about one landscape design firm's look at some of the new hardscape features I'd like to add, but these are the first plants we're adding to the backyard, so I feel good about the little bit of progress we've made this season.
#newoldbackyard backyard beds grasses landscape landscape design landscaping plants
Location: Downers Grove, IL, USA