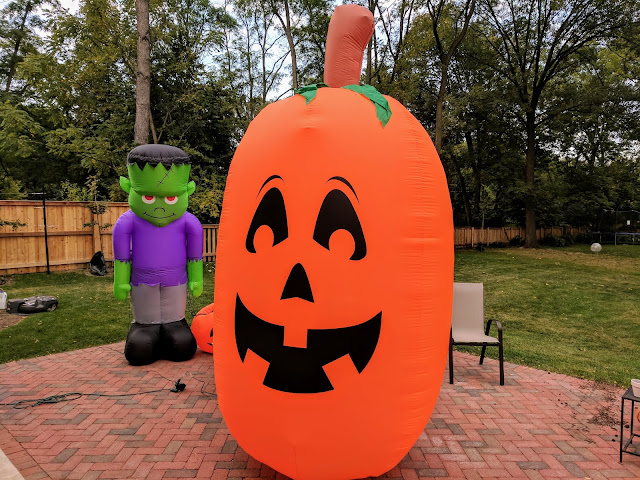 It is no secret that I have a soft spot for two holiday-related items that are, umm, not super cool.  The first is Christmas Village structures.  Have you met Mantleburg?  The other?  Holiday-themed inflatables.  Most recently, I've covered how we picked up this blinking eye owl Halloween inflatable.  And I've posted some photos and videos of other Christmas and Halloween inflatables at Menards over the years.  I even have a playlist on my YouTube Channel showing some of these Menards inflatables.

The spark for this whole thing around inflatables can be traced back to this post in December of 2013.  That's when I finally caved and bought our first inflatable.  You'll note that the Christmas of 2013 lines up with the Babe growing up and having some holiday-related awareness.  She and now her sister and brother have certainly influenced my purchase behavior.

And, to be fair, I think Nat isn't sold on them.  Scratch that....I *know* she isn't sold on them.  She, rightfully, fears the "Sanford and Son" look that - as a horder by nature - I would naturally be drawn to with littering our entire front yard with inflatables of all shapes and sizes.  Theme?  Who needs a cohesive theme!?!

As for this Halloween, we've added to our menagerie.  I mentioned above the one Halloween inflatable we've acquired so far this year:  the blinking eye owl inflatable from Menards.  In the photo above you'll see two other Halloween-related inflatables.

On the left is a big Frankenstein.  He's pretty cute.  But, he's not new.  We had him last year for the King of the Ball Tosser's "Monster" themed birthday party.  You can see Frankenstein here in this post showing our house on Halloween last year.

However, the other one in the photo above?  The "big" pumpkin?  That's new!  I mentioned this inflatable in a post at the end of August when I showed the kids at Menards.  But, one afternoon this past week, the kids wanted to see them blown up.  So, I set them out on the patio and gave them a dry run.

After showing them off for a day to the kids, they found their way back into their boxes for now.  When we get closer to October, I'll bring them back out.  And hopefully sneak one or two of these inflatables into the front yard, despite Nat's protest.
#newoldbackyard halloween halloween creep halloween decorations holidays inflatables menards Menards Halloween patio
Location: Downers Grove, IL, USA