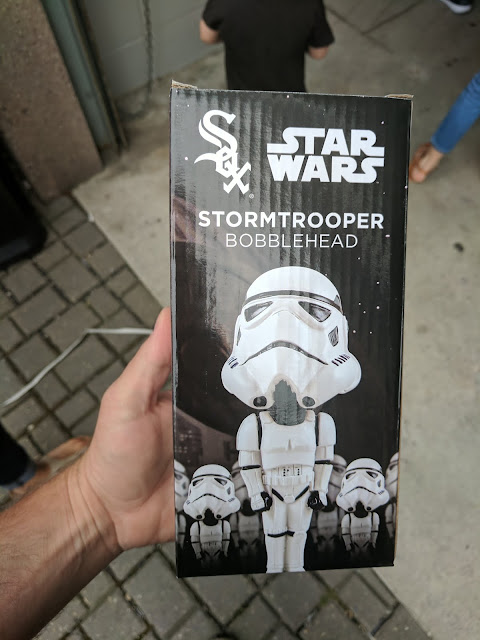 On a recent Saturday, we packed the kids in the minivan and took them down to see a White Sox game.  When we arrived - which was early - we were surprised by the crowds waiting to get into the park and the noticeable buzz around the gates.    There were huge lines waiting to get in even before Comiskey Park opens.  Strange, right?  I mean....it *is* the White Sox, right?  They're terrible.  In last place.  (In Hahn, we trust, btw)  The place should be empty.  I guess it was a Saturday night, so there are the fireworks, but in today's world, that seems like a stretch to think that people would be willing to go to a Sox game just for fireworks like we used to when I was a kid?  (Maybe the whole Disney fireworks thing has jaded me for fireworks now?)

But then we saw the t-shirts.  And the costumes.  There was a lady with Princess Leia buns.  A dude with a wookie hoodie.  And the buzz?  It was because it was Star Wars night.  Nat poked around on her phone and realized that they were giving away 15,000 Star Wars Stormtrooper bobbleheads.

Now *that* explains it.

So, we got ourselves in the line and shuffled to the gate when it opened.  After passing through the metal detectors, we were each handed one of these boxes you see above.

And the King of the Ball Tossers?  He couldn't wait to open his up and get a closer look.