The Future of Downtown Downers Grove 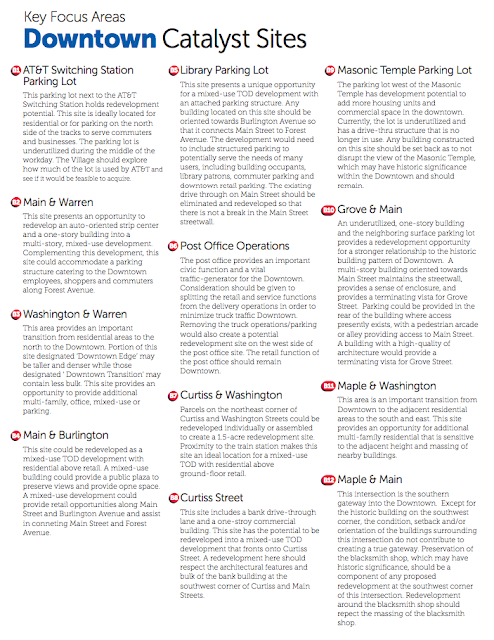 Tonight, the Village Board of Downers Grove is meeting to discuss the future of Downtown Downers Grove.  According to the agenda, they're actually doing this:


Discussion of the proposed downtown development regulatory framework developed by the Comprehensive Planning Ad Hoc Committee and the Plan Commission in accordance with Village Council direction.

If approved, the plan laid out - appears to me at least - to provide the blueprint to continue the reinvention and reinvestment of downtown Downers Grove.  The plan lays out specific locations and recommendations for improvement and calls out 12 specific 'Downtown Catalyst Sites" that you can see above.  Click on the image above to see the specific descriptions.

We're new to town, so I had to pull up a Google Streetview Map along with this list to get a sense for what is there right now.  All twelve seem to be significant upgrades and I'd concur that they seem to be significant opportunities.   Basically every under-utilized parcel in the core (either because of it being a surface lot or a one-story structure) will - once this plan is approved - has a governing principle that helps guide the redevelopment.  That's a good thing.

As for some of the changes:  I'm in support of MORE density in every sense.  Greater residential density.  More mixed use buildings with first floor retail/restaurant (hopefully not service/office) and upper floors being retail or office.

However, one thing that I disagree with the recommendations is in building height.  The plan spec's out the number of floors recommended and I think they're being a bit too conservative with just three stories. Elmhurst was fought by neighbors over the six-story parking garage at the time.  But now?  It almost seems visionary for the City of Elmhurst to have been able to pull it off.

I'd support four or five story buildings in the Downtown Core.  But, I get it.  Baby steps, right?

I also think that the corner of Maple and Main is critical.  In reading the docs, I learned that the blacksmith shop on the southwest corner has some historical significance, so it may be retained.  And the northwest corner is already under construction with a development called "Maple and Main" from TrammellCrowe that will add 115 apartments and 4k in retail square footage.  See the images below of this development.  This will be a nice 'gateway' as the plan lays out.  But this leaves the other two corners.  Let's make sure we get those right. 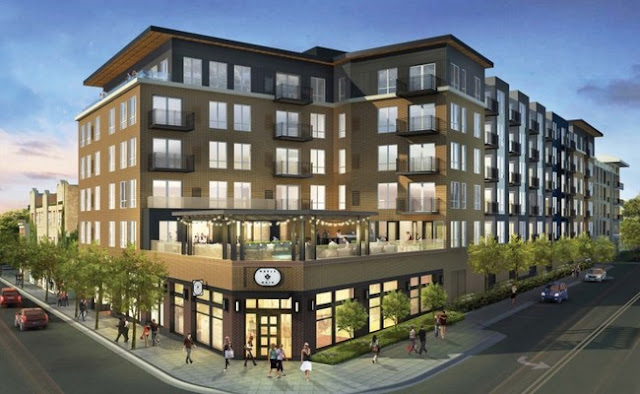 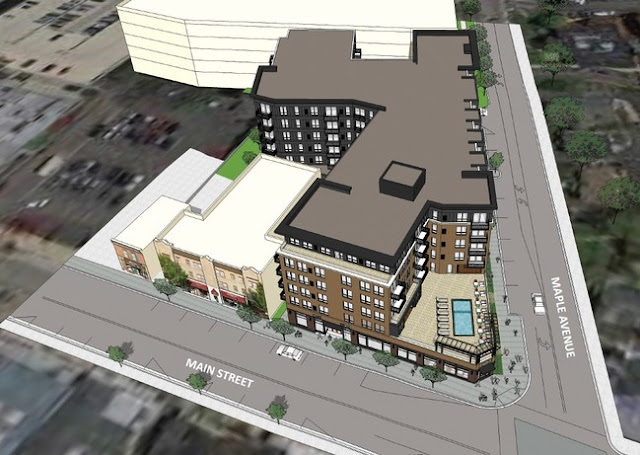 There are also dozens of maps of varying degrees including this one below that shows some of the consolidated recommendations.  One of the things that jumps is the move towards a parking deck along with the removal/reuse of surface lots.  The relocation of the Main Street Metra station is also interesting as it would allow for the trains to arrive at the station for passengers to get on/off while NOT crossing over Main Street and keeping it open.  Even better would be the consideration of an underpass somewhere in Downtown? 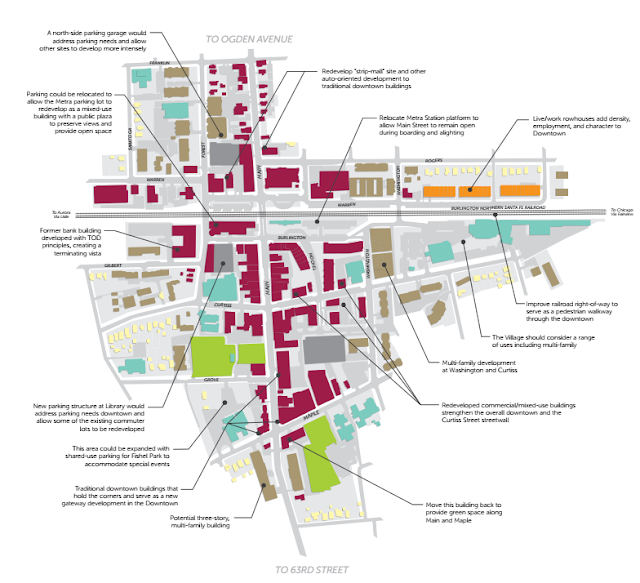 One thing that seemed to be missing for me was any discussion of streetscapes, lighting, signage and landscaping?  There's plenty of do's/don'ts when it comes to building materials and selections, but what about the public improvements?  Wayfinding signage/gateway signage?  Rethinking the hardscapes and streetscapes to create more of a sense of place?  Perhaps that comes in a discreet Main Street/Downtown plan?