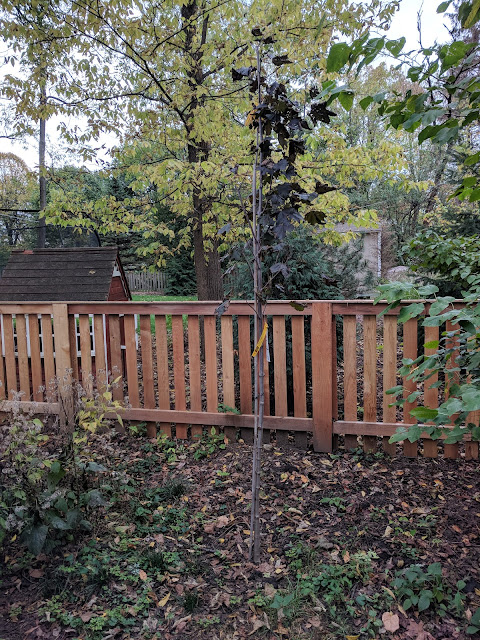 Back in July, we added a Crimson King Maple tree to one of the far back corners of our #newoldbackyard after finding it on sale at Menards.  It was the ninth tree we planted this season and the final one added to the arboretum before the summer heat hit.  I planted this one pretty late - in mid-July - and then we were hit with a pretty severe drought through most of August and September.

The Crimson King is a purple-leafed Maple tree with shallow roots that doesn't give much of a show in the fall, but in exchange, gives a nice contrasting color most of the summer.  Nat's folks have a big one up on Twin Lakes that I've admired and that's part of the reason why we planted this one back here.

I'm posting this photo so I can revisit this tree in the Spring when it *hopefully* comes back to life with some new leaf buds.  This is now located kind of behind the big trampoline that Nat bought for the kids, so it has been somewhat out of sight, out of mind.

But, despite me mostly neglecting this, it has mostly weathered the drought and is hanging on to most of it's leaves.  For now.  You can see some of the other foilage around it is still green, so unlike our Dawn Redwood, this one seems to be going to slumber at just the right time.  Fingers crossed that it will over-winter well and *spring* back to life come March.
#newoldbackyard arboretum Crimson King Maple tree fall fall colors landscape maple trees menards trees
Location: Downers Grove, IL, USA