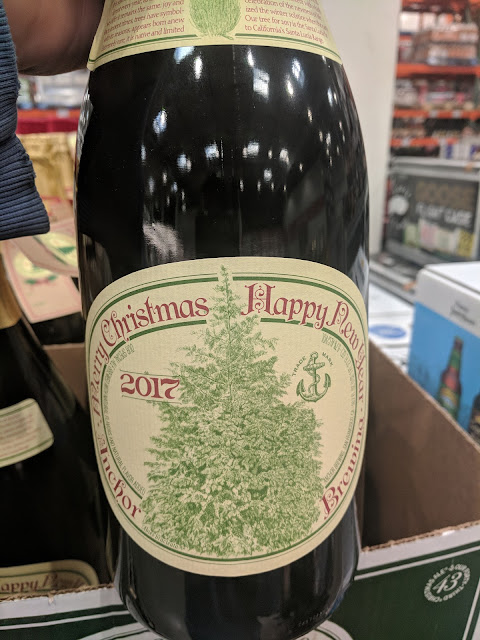 There are plenty of Christmas traditions that we participate in (trains, advent calendars, elfs, tree day, Walnut Room, etc), but there's also a beer tradition that I've grown to look forward to:  the opening of the annual Anchor Steam Christmas Ale as done by my brother-in-laws in Naperville.

I've chronicled this in the past here on the blog.  Here's a post from last year's version.  Here's the 2015 version.  And here's a post from 2010 with that year's bottle.  And based on those posts, I've been drinking a little bit of this stuff for 10 years now, despite this only being the fourth version that I've documented on the blog here.

As for this year's brew, they once again picked a unique tree for the label.  From the Anchor Steam site:


This year’s tree is the Santa Lucia fir. Extremely rare, it is native and limited to California’s Santa Lucia Range along the central coast of California.

They bought some smaller bottles like normal, but I know that my father-in-law also picked up one of those giant magnums that they were selling at Costco, too!  I imagine that will be opened on a night when there's a big crowd so it will go fast.
anchor christmas ale anchor steam beer brother-in-law christmas christmas traditions craft beer morans naperville