Uncle Mistletoe Makes An Appearance In Macy's Windows for 2017 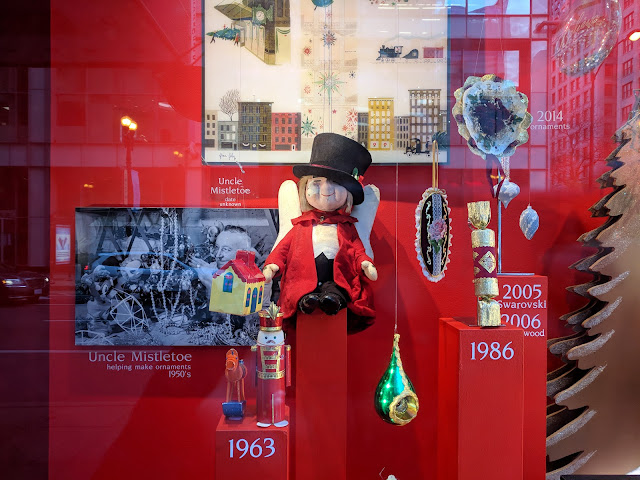 Back at the end of October, I posted a photo of the 'coming soon' screens that Marshall Field's Macy's had put up on their State Street windows as part of their annual reveal of the Holiday window tradition.   Soon after the calendar turned over to November, they opened up the windows for public viewing and while the ones on State Street are traditional ones, they now have set up two different ones on the Randolph Street sides.

First...when I say 'traditional ones', I mean...holiday stories of some sort.  This year, it isn't so much a linear story where the you can see kids racing from one window to the next to learn the different storylines, but rather just a set of different windows, each in a feeling/spirit.

But, this is the 50th anniversary of doing animated figures in these windows, which is cool and that's why they've organized these two separate windows on Randolph - to kind of celebrate their history.

And, much to my delight, look who showed up?!?!

If you've read my posts about Marshall Field's Macy's Christmas, you know that I have been consistently bummed out that they've mostly abandoned Uncle Mistletoe - who they created much like Montgomery Wards created Rudolph the Red Nosed Reindeer.

You can see him up there on a stand with a 'date unknown' marking and if you click here on this version of the photo in my Google Photos account, you can see a larger version where you can zoom way in to see the state of his face. He's old!  But, still there.  Pretty, pretty, pretty great!

But, there's not just one Uncle Mistletoe.  Nope.  There are two of them!  In the other window on Randolph they are celebrating the 50th anniversary of animated windows with a display that includes an animated Uncle Mistletoe from 1981 where they featured "The Night Before Christmas".

This Chicago Tribune piece covers all the prep they go through to pull off both the windows and the Walnut Room:


At the same time one team is working on the tree, another is decorating the State Street windows that will show off animated figures in stories for the 50th year.

For Macy’s that anniversary means a revival — freshening up old displays to look like new.

...For more than two weeks, window display manager Kate Goodman and her team have been gently placing and perfecting the displays. The window scenes, which typically change from year to year, are shipped from a manufacturer who refurbishes parts of old displays and makes new ones, depending on the theme.

Then engineers, carpenters, and craftsmen are brought in to build and piece them together. Goodman and her team spend another week rearranging, tending to details and perfecting.

I have posted about the 1981 Marshall Field's Christmas and actually own the mug from that year and what is interesting is that they didn't use Uncle Mistletoe on the mug that year?!  Despite him being in the windows?  Nope...they used a teddy bear and a Christmas tree on the mugs that year. 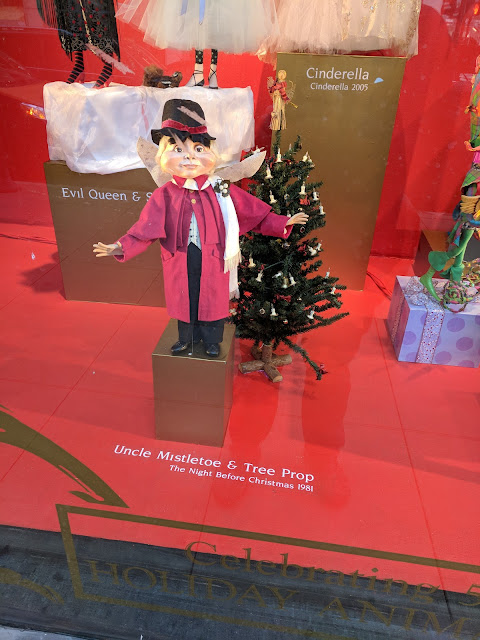 I hope they get some strong feedback from shoppers that we LOVE to see Uncle Mistletoe.  And that Marshall Field's Macy's gets their act together and bring him back in a big way.