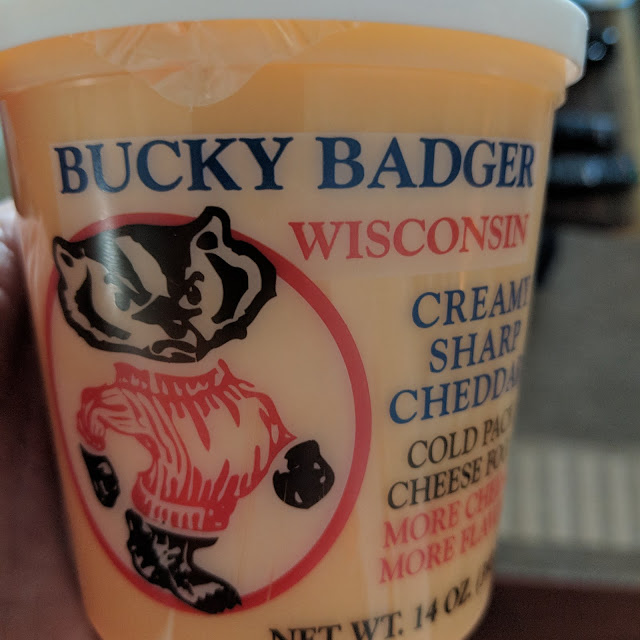 Those of you who have been following along on the blog know a few things about me:  I'm pretty passionate about pizza and gardening.  But also about Club Cheese.  Yeah...Club Cheese.  You might call it Cold Pack Cheese.  Or Cheese spread.  Or a 'tub of cheese'.  Here in Illinois, Merkt's rules the grocery store, but Trader Joe's sells something that is a bit more whipped than Club Cheese that they market under the label "Pub Cheese".  It is all good stuff.  And I'll eat a lot of any variety of the stuff that I come across at parties and social gatherings.  Also, I'll eat a lot of the stuff inside my very own house.

Pretzels, tortilla chips, pita chips.  I'm pretty agnostic when it comes to the vessel that I use to scoop up the club cheese and deliver it to my mouth.

But, I've had a few Club Cheese experiences that have allowed me to demonstrate a strong preference for a particular variety.

Sure, I still stay true to Merkts.  It *is* the most readily available version, so it is the one that eat and buy the most.  But, as I've written about in the past, now that we're spending more and more time in Wisconsin, I've been exposed to a whole new set of Club Cheese experiences and I'm beginning to consider how I can buy and transport - for when 'company comes' - the right mix of Club Cheeses back in Downers Grove.

You know...it is funny...we went to a party in our neighborhood before Christmas.  It was a great party with lots of food that after all the kids were sent home to be with the baby sitters, we ended up with like 5 or 6 other couples down in the basement. Drinking at the bar.  Quite a nice basement.  And a fully stocked bar.  But, you know what was the hit?  These pretzels.  They were flavored pretzels.  You know...like those Snyder Pretzel Pieces that are flavored that the sell at the Jewels?  Like those, but house made.  The host's Mom up Minnesota makes the pretzels by the batch and ahead of the holidays she UPS's them down for the Host to put out at his holiday gatherings.  And he also brings them into his office.

He had 'original' flavor - which was like a pretzel dipped in a Ranch seasoning packet.  He also had some Honey Mustard (I think??) and there was maybe one other flavor.   I don't totally remember the other ones besides the original.  I destroyed two bowls of the original flavor ones while I was sititing in my bar stool that night.

Well...anyway...this is a long way of telling you that this guy - in our neighborhood - is now 'known' for these pretzels.

And guess what?  I think I want to be known for having some world-class Club Cheese at my parties.  Maybe I'm the only one who enjoys the stuff?  I doubt it.  But, even if that was the case, I'm fine with it.

Over the past year, I've chronicled various Club Cheeses here on the blog.  There was the Glas Cheese Spread that we bought at the Woodstock Farmers Market.  And the Brewster House Club Cheese that I bought at Richter's in Twin Lakes.

And then, of course, there was the Grand Daddy of 'em all.  The King of Clubs by the folks at the Mars Cheese Castle.  I wrote an ode to the King of Clubs.  It was one of those food experiences that changes they way you view the world.  It was - at that point - the measuring stick that I was using for all other Club Cheeses going forward.

That's why this Bucky Badger Cold Pack Club Cheese has me thinking that I need to go back to Mars and pick up a crock of the King of Clubs to compare.  Why?  Because, this stuff reminds me so much of the King of Clubs.  But, my memory might be off?  It would make sense for Mars to outsource their Club Cheese to someone like L&L, right?  They're not running their own line.

The ingredients - you can see below - are remarkably similar to the ones you can see on the King of Clubs photo that I posted here.  I poked around on the L&L Foods site and there isn't much to show, but I'm now wondering if this place is sourcing and making the King of Clubs?

They sell Bucky Badger at WalMart, which makes it so easy to access for me.  The Mars Cheese Castle is about 35 minutes away - and the King of Clubs is worth the trip, but if this stuff is the same in the tub, I can simplify things and just go with the Bucky Badger?

And if I'm able to buy this at the Lake Geneva WalMart, this might be the key to unlocking myself as the King of Club Cheeses just like my neighbor is the boss when it comes to flavored pretzels?!?! 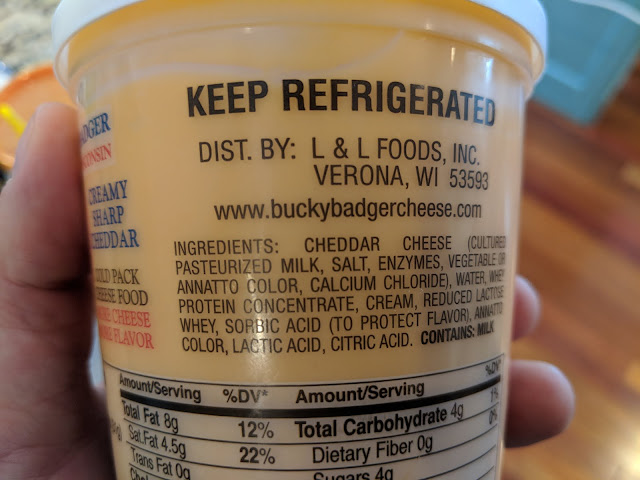 The nutritional listings are different:  Bucky has 8 grams of Fat per serving.  King of Clubs has 7.

King of Clubs lists "Guar Gum" as one of their ingredients.  Bucky Badger not so much.

So, it is NOT the same.  But, does it taste the same?  We'll have to do a head-to-head this Winter. 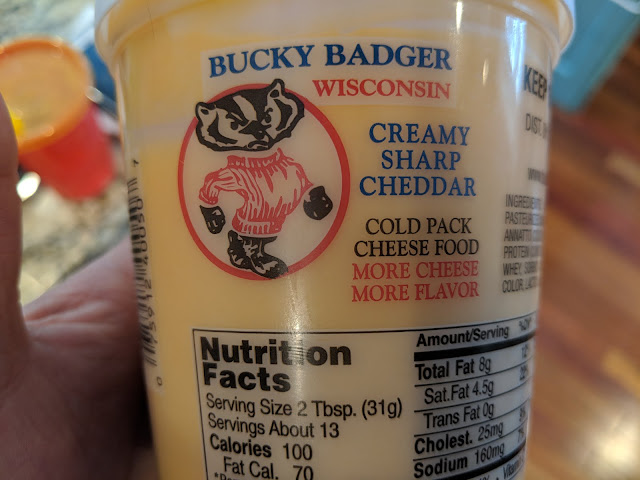