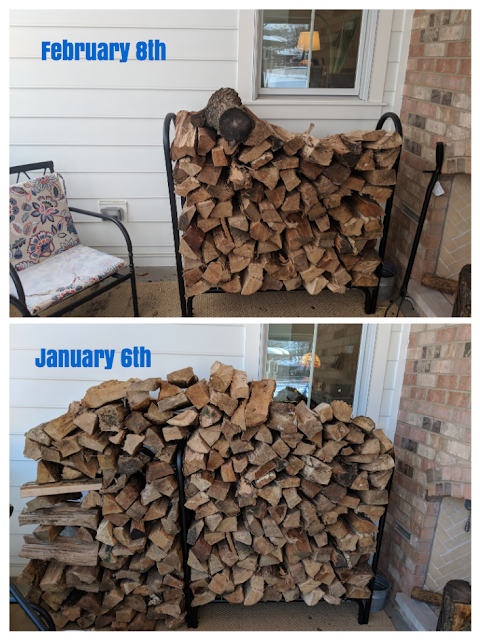 Here's a little update on our firewood situation.  I'm posting this mostly for my own historical marker of what we consumed so far this winter, both for planning for next year and to document where we are in early February.  Back in early January, I posted a photo of our Face Cord (or Rick) of firewood that we had delivered and stacked in our screened porch.  Thanks to Google Photos, I made this little top/bottom comparison of the current situation (top) to where we started when the Face Cord was delivered.

For full historical accuracy here on the blog, I suppose I should mention/link to the origins of this series.  There's one more before/after photo in my firewood series, but it is from November when I started to chop my own wood from logs that were left behind on our lot when we cut down some trees pre-build.

But back to the current state in the top photo.  Based on my eye, we've used about half of our Face Cord?  Seem right to your eye?  Maybe a little more than half has been consumed?

Now, remember, we got through November and December using the stuff that I chopped myself.  So, this was delivered in early January.  That means, in a month, we rip through half a Face Cord.  February is still very much fireplace season, so I expect to use quite a bit of what is left.  When March comes, I figure we'll probably stop burning fires due to the rise in temperature.   But, if you factor in November and December, I'm thinking we might end up needing double the wood we bought this year.  That would be a Full Cord.  What, what!?  (It is the little things like this that I get excited about.)

That's also dependent on the temperature next Winter.  Like...was January particularly cold and bitter this year?  Yeah.  It was.  So, we ran the fire a lot.  Maybe next year we won't?  It seems to me that it is better to be prepared than to run out.  Firewood lasts forever, right?  Like, if we don't burn it one season, we can still burn it in our outdoor fireplace in the fall.  Or wait until the following Winter.  The issue, of course, is the location for storage.  Right now, it is in our screened porch.  Which...Nat has allowed me to take over for the Winter.  Spring comes, and there's still a huge pile of logs in there?  I don't think that will fly.

Maybe I'll do another one of these photo check-ins right at the beginning of March and we'll know what we used in February.  That will tell the story of what next year's order needs to be.

(also...for those eagle-eyed readers....notice the lampshade changed on my desk in the background?  Nat wasn't having my Tiffany-inspired Illini lampshade.  She swapped it out for a more simple one.  She thought the vintage Fighting Illini football helmet base was enough.
fireplace fireplaces firewood firewood consumption winter
Location: Downers Grove, IL, USA