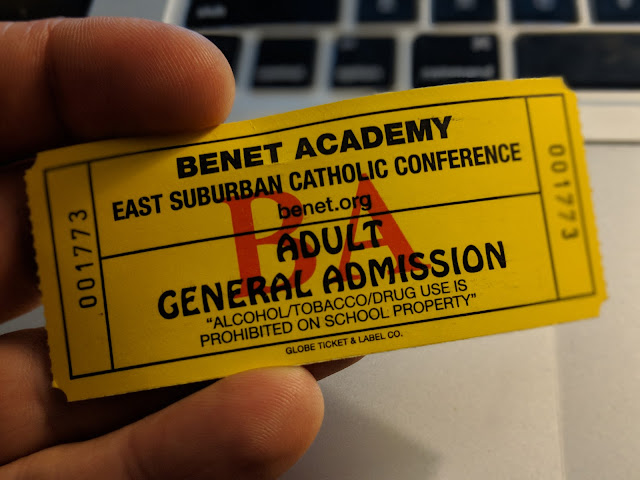 Back in the fall, I posted a very similar photo of a Benet Academy ticket stub.  That one was for a fall football game that we went to as a family.  Both to watch the game, but also because one of the girls was dancing at halftime with the Avions (the dance group).

The ticket you see above is from a recent basketball game that we attended to cheer on the Redwings.  And, once again, watch one of the girls dance at halftime with the Avions.

We had a lot of fun, despite it being a not-so-spectacular game.  First, Benet couldn't buy a bucket.  And neither could the other team.  I think the score at half was like 12 to 15 or something.  Also, it was a make-up game.  The game was originally scheduled to be in January, but because of a heavy snow storm on a Friday, they cancelled the game.  Because of that, the crowd turnout was pretty paltry.   I think there might have been something else going on at the school, so that might explain the not-so-great student turnout.

Also, I couldn't help but think about some optimizations that could occur at the Benet gym.  I grew up going to Lincoln-Way High School games and then played on the LWHS Knights Varsity basketball team in the 1990's.  We played our games at the East Campus gym.  This was before there were 4 (make that 3) Lincoln-Way's.  There were two campuses, but one school if that makes sense.

Anyway, the East Gym is where we played our home games.  And it is a gym that is set up for basketball games.  You can kind of see the gym here in this Patch story.  Note the two levels of bleachers.  This is on both sides of the gym.

The Benet program is a pretty great one - with plenty of history of winning and big-time players.  But the gym?  Meh.  Listen...it isn't just the size of it.  I can get behind a small gym.  With fans right on top of the action.  Back in my day (get off of my lawn!), we played at places like Argo that had the bleachers elevated about the action and the court was down in a pit.  Same with Lockport's old gym.  The out-of-bounds line was like feet away from the walls.  Or at least it felt that way.

There were some things that my old Coach (Coach Steve Little) did that had a big impact on the 'feel' of the program and experience for both the fans and the players that stand out that are improvements on what Benet has right now.   I'm pretty sure that Coach Little - who retired recently - was the influence over how Friday nights operated at LWHS.  He was a brilliant basketball mind who paid attention to the details.  Let's talk about some of those.

First, is the players sit in folding chairs.  They were padded back in the day.  But they weren't on the first row of bleachers.  You can watch this video (which I've tuned to 3:03) to see the home bench at LWHS right now.  It was the same back in the day for me, but red and black instead of blue.  Now, sure...that's a nice thing for the players because they're padded.  The Benet bench?  It is in the first row of bleachers.  Check out this video that shows the opposing team's bench.  What does that mean? It means that the players sit right in front of fans.  But it also means that because Benet dresses like 20 players, the ENTIRE front row of bleachers is taken up and fans can't come/go during the game at all.  They players basically block the bleachers.  Seems like they either need to NOT pull the bleachers out all the way (like, maybe leave the top row stacked up??) and allow the players to sit on chairs and leave a way-way behind the bench.   This would make the fan experience quite a bit better.  But it also would improve the program's ability to work during the game.  Managers can sit behind and have access to the full bench during the game.

Next, let's talk about the court - the paint layout specifically.   I recognize today that gyms need to be multi-purpose.  So the lines need to make sense for many uses.  But, just about every line is the same size and there's lines going both side-to-side and front-to-back.  We arrived early and caught the 3rd and 4th quarter of the Sophomore game. At least two times, players were caught standing out of bounds with the ball because they couldn't easily (without looking) identify the out-of-bounds lines.  Check out this video to see the Benet court in the background.  Lots of thin lines.

Again, back in my day, Coach Little had a bold paint layout.  We had the entire three-point arch painted a solid color (I think?), but we also had massive, thick out of bounds lines.  Like three-feet thick.  Again, look here to see what LWHS has now.  The main court is different, but the baseline/sideline paint is the same that I remember.  Big, bands of paint/logos along the baseline make it abundantly clear what is in/out.

Finally, the warm-up program.  It seems that teams these days have lost the art of the 'warm-up circus'.  The 20 minutes before the game, when the team runs out, dribbling the balls in a line with the band pounding is one of my favorite memories of high school hoops.  We had a very particular routing - that we even practiced.  What teams do during the warm-up tells me a lot about their coach.  Ours was all circus.  And I loved it.  It was intended to be fun to watch, but also focused on some of the key players (who were actually going to play).  The Benet team has - what appears to be - an amazing coach.  He's won all over the years in a big way and is highly respected.  And his team comes out and does put on a little show, but then it breaks down quickly.  They do a 'tap the board' line thing, then form two layup lines.  Good so far.  But, not enough circus for me.  There are things that I love seeing in warm-ups including what the team is wearing (Points to Benet for having their guys come out in pants!).  My prefered look is old-school and doesn't happen much any longer:  Full top/bottom warm-ups with snapped-up pants and long sleeves.  With a shooter shirt on under the warm-up top.  Come out, do your circus act, head back into the locker room to shed the warm-ups, but keep the shooter shirts on and the bench guys were those throughout the game.