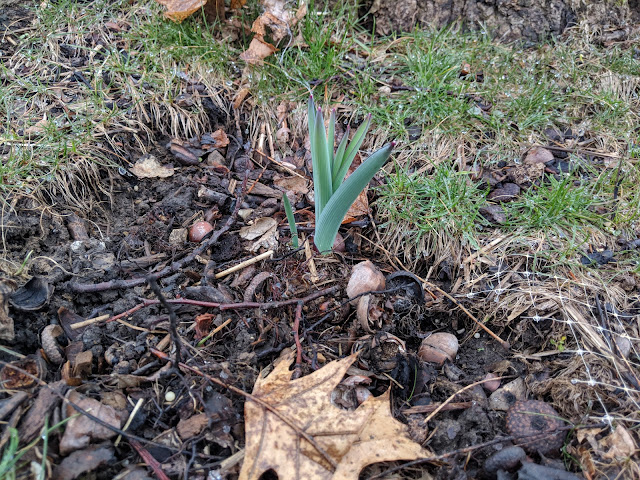 Last October, I picked up 10 Purple Sensation Allium bulbs and planted them around a big oak tree in our backyard.  That initial planting post is here.  Over the weekend (before the snow came in on Monday morning), I spent some time out puttering around the yard and discovered that - just like the tulip bulbs that I planted at the same time - that some of these allium have emerged.  This one in the photo above, is right at the base of that mighty oak and I'm hoping will continue to grow and give us a little 'show' with the purple orb.  Along with hostas and ferns, I have a soft spot in my gardening heart from allium.  As I wrote last fall:


I first wrote about Allium bulbs all the way back in 2011, when the first set of shoots broke through the mulch that Spring.  I planted those in 'secret' as a little surprise for Natalie.

At the beginning of April, I mentioned here on the blog that we are looking at a treehouse in the yard and the tree that we've identified as the prime candidate happens to this very same oak where these allium are planted around.   These allium don't have a chance if they're under the deck of the treehouse both because of the lack of light, but also the inevitable trampling that is going to occur when the savages run around and under the treehouse.  So, this might be their first and only season in this spot, but I'll let them go through their growing season before moving them later this year.  That is...if (and that's a big "if") we get the treehouse program up off the ground.
#newoldbackyard #OnGrandGardens allium backyard bulbs flowers new old backyard on grand gardens treehouse
Location: Downers Grove, IL, USA