This is the fifth chapter is a series of our landscape plan posts that show off various portions of our #newoldbackyard in the planning stages.  The other four are here:

1.  Part of the southern fence line that includes some hydrangeas, hostas, ferns, allium and Canadian Hemlocks.
2.  Part of our rear foundation planting areas, right outside our breakfast nook/kitchen windows. Grasses, boxwoods and even a peek at one of the rhododendrons that *this* post is all about.
3.  The hornbeam/privacy hedge on the north fenceline near our screened porch.
4.  Far southwest corner by the trampoline that includes some Canadian Hemlocks.

This fifth chapter covers just two plants that you can see in the sketch above.  They are both PJM Rhododendrons that occupy some foundation beds on either side of our rear stoop heading to our back patio.

Here's a look at those beds that I took this past weekend: 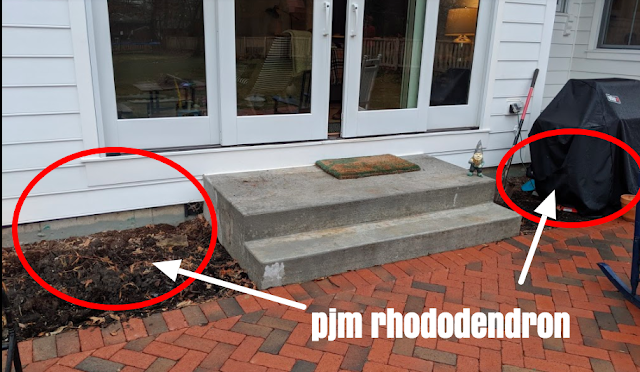 You can see the two beds are good-sized and fall on their side of the concrete stoop.  The one on the left of the photo is wide open, but the one on the right of the photo is currently occupied by our grill.  I bought a couple of those resin A/C unit platform/pads and put those on top of the mulch, then placed the grill on top of it, so it wouldn't sink into the ground.  It was a nice spot for the grill, but now, it seems that we'll have to relocate it in the name of getting our backyard planting up off the ground.

The plan calls for one #5 gallon plants on either side and these are going to be some of the first plants we get in this Spring.  I have not ever planted a Rhododendron, but I've certainly heard of them.  I've even come across them in the garden center, but never pulled the trigger.  Since these were spec'd in the design, I've looked into them a bit and was quite surprised to find out that they're an evergreen.  Yeah...evergreen.  Just check out this plant listing on the Missouri Botanic Garden.  They flower early - in April - and are a good fit for our Zone 5B.  From the listing:

PJM Group is a series of rhododendron hybrids that resulted from crosses between R. carolinianum and R. dauricum var. sempervirens. These hybrids are compact, rounded, small-leaved, evergreen shrubs that generally grow to 3-6’ tall and are noted for having exceptional winter hardiness.

These two plants, along with all of the other ones that I showed outside of our kitchen windows in this post are the first set of plants I'm going to buy - as early as this weekend, so by next week, I'm hoping that we'll be able to update the blog with a before/after comparison.
#newoldbackyard #OnGrandGardens backyard backyard dreaming backyard planning evergreens landscape landscape beds landscape design landscape plan new old backyard on grand gardens patio rhododendron