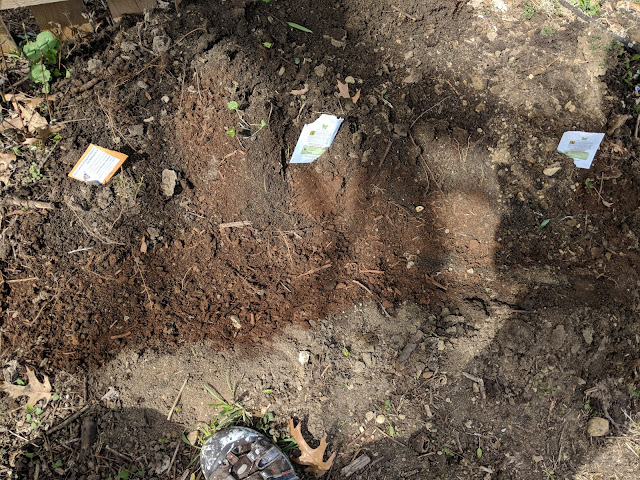 Back in March of this year, I posted a photo of a couple of Milkweed seed packets that we received from the Save our Monarchs Foundation that are appropriate for our 5B zone here out in the Chicago Suburbs.  I also had this older packet of Milkweed seed that we received at a parade in 2016 that I never planted.  With Spring here and the back of our yard still a mess, I just decided to sow them directly in the ground and cross my fingers that we'll see some action on them as the weather warms up.  I put them in a staggered row with the two Foundation packets on the right and the parade packet on the left.

I put the empty packet envelopes down in the soil and took this photo so I can go back there later this Summer, see if anything is happening with them and then know which type is which.  I'm hoping that a few of seedlings will emerge and we'll get a nice first year plant that can help the Monarchs this season.  I took the Bird and the KotBT out there and they helped me plant them as part of our gardening together.

As I mentioned earlier this Spring, we applied and were awarded the "certified wildlife habitat" by the National Wildlife Federation.  The elements of building a habitat are: food, water, cover and places to raise young.  Planting milkweed is part of both the feeding and providing cover for the Monarch Butterfly and is supported by the NWF.  For other forms of food (that allow us to qualify under the NWF certification) are: nuts (walnut trees + acorns), suet and our other bird feeders, and even wild raspberries that we have growing in the back.
#newoldbackyard backyard backyard planting butterflies certified wildlife habitat critters garden garden diary gardening milkweed monarch butterflies seeds seeds sown wildlife