Some Spring Cleaning On The Blog Template - Fonts, Header, Colors 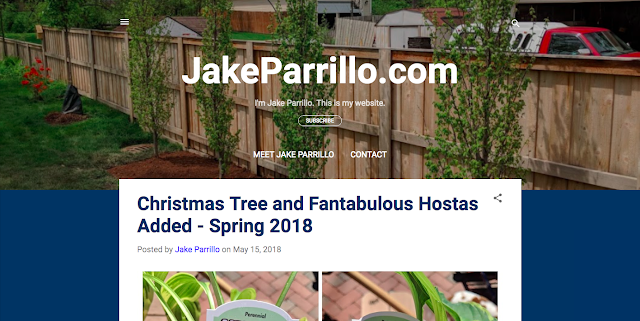 If you look around here on the blog, you might have noticed a little bit of updates.  Call it 'Spring Cleaning', but a few weeks ago, I ended up updating the fonts site-wide to Roboto, tweaked some of the colors (Blog title, tags, tabs) and added a header photo.  You can see the screenshot of the blog above that includes that header photo of the new set of Frans Fontaine Hornbeam Trees that I recently put in.

The last time that I update the look of the blog was back in March of 2017 when I added this responsive template that was mostly blue.

While this isn't an exhaustive look at the process, this is the (at least) 11th documented version of the blog over the years.  Here are the first nine versions of screenshots that I have from 2004 to 2016.  And here's the 10th and most recent.

The fonts are an improvement (imho - and that's 'humble' for sure, btw!), but the real improvement is the header photo.  It personalizes the site a bit, as one of Nat's honest critiques has always been that my blog was far too generic (and it was!), but this also harkens back to my early days as a blogger on the JoinTomCross.com blog and then RhodesSchool.com.  Check out this version in the Way Back Machine from 2006 that shows a header photo of a gas station and makes reference to Wilco.  Or this one from February of 2007 that shows records in a stack.  I remember - vividly - how I would agonize over the header images of my blog and swap them out pretty regularly.  They were there as broadcasts of interests, but I also used them to send some messages.  Sometimes petty work things.  Other times, subtle indications around courtship (mostly with Nat!).  I've missed some of that imagery stuff, so I'm glad to have brought it back here on the blog.  No idea how often I'll swap it out, but with Summer being (almost) here and these Frans Fontaine Hornbeam trees being the 'apple of my eye' right now, it seemed appropriate that this was the initial re-introduction of the header image.

Here's a look at the new interior page (pardon the white header that sneaks down in this screenshot tool.) that shows the blue sides of the page and the header photo and interior navigation.