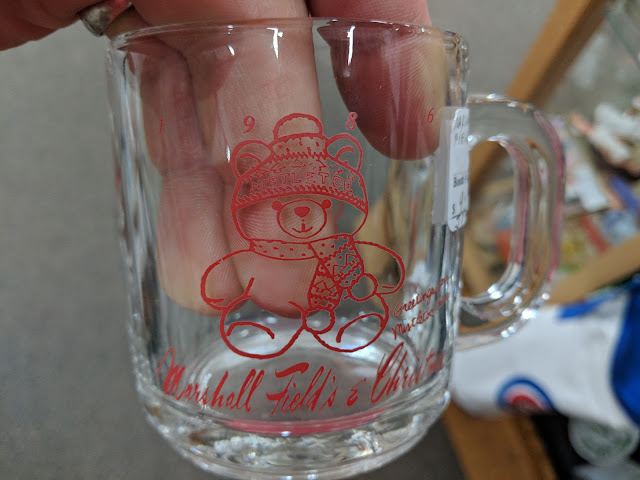 Over the years, I've shared my family's experiences at the Walnut Room at Marshall Field's Macy's on State Street in Chicago.  We go every year and have gone since I was just a little guy.  It is something that my Mom organizes and I come to look forward to each season.  I've also chronicled the unfortunate fate of Uncle Mistletoe and Marshall Field's itself.

I've also begun to build a document of the annual mugs that are released by the Walnut Room each year at Christmastime.

This post has the full reference list that I've built so far.  But, the photo above includes a new one:  1986 featuring Santabear in red outline form1.  Or at least that I thought it was Santabear.  But, look at the band on his hat:  Mistletoe.  And if you look closely at the scrawl on the far right you'll see: "Greetings from Mistletoe Bear."

Let's go back and look at the history so far on the blog as documented through the glasses I've come across in the wild.

1 - note this mug is filed under a 'One that Got Away'.  This was taken in an antique mall up in Wisconsin and the seller was asking $7 for it - which for me - is way too much.  All the other mugs that I've scored were Goodwill finds or Garage Sale finds and were something around a quarter each.
antique mall christmas Marshall Fields Mugs one that got away Santa Bear vintage christmas vintage finds Walnut Room