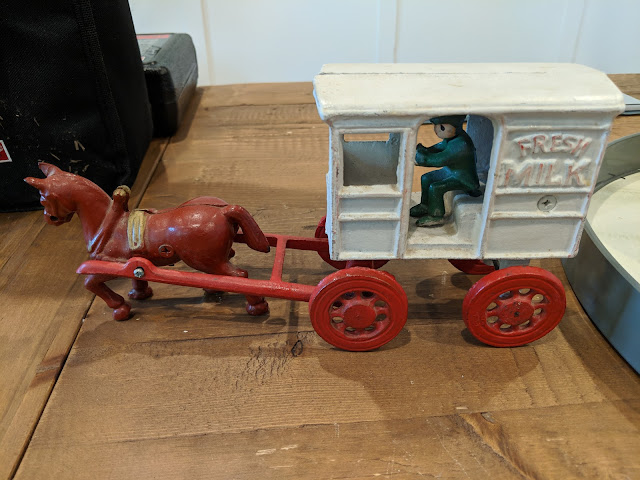 After having posted a bunch of items that I passed on (or 'got away') at a recent Estate Sale, I figured I'd post some of the items that we *actually* bought - starting with this cast iron toy.  The King of the Ball Tossers tagged along with me to the sale and he asked if he could have a little bit of 'pocket money'.  Sure, I said.  He naturally gravitated towards the toys and found this vintage cast iron horse and buggy "fresh milk" delivery wagon.  It is three-piece with the horse/harness, the delivery wagon and the driver being independent pieces that each latch to each other.

We picked it up and they were asking three dollars.  I coached The KotBT to go up to the Estate Sale host and say:  "What's the best you can do on this toy?"  Of course, the guys were warm-hearted and smiled when he opened the negotiations.  He quickly waved his one dollar bill and the guy said:  'for you....I'll take it'.

And that's how we went home with a vintage cast iron toy.  Looking on eBay, it seems that people are asking $20 or so for this thing, so it appears that we got a deal of sorts.    This isn't destined for re-selling, but rather the toy pile.

The only issue is the weight of this thing.  One drop and it will do some damage to the floors, right?  But what won't get damaged?  The toy itself?!?!
estate sale estate sale finds vintage toys