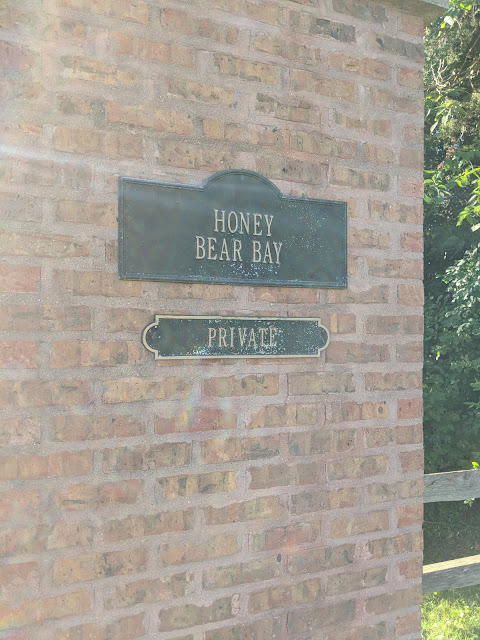 Last Summer, I was up at the Lake Geneva Walmart buying our fishing license when I noticed a guy who looked familiar in a trench coat inspecting a kayak along with a youngish other man.  I looked them over and couldn't right away figure out who it was.  Then it clicked.  It was Chicago Alderman Ed Burked and his (infamous) security detail.  Of course, that got me wondering what the Alderman was doing up there and a few searches on Google lead me to this story about how he came to acquire a place called Honey Bear Farm.

On a recent run, Natalie came across this sign you see above:  Honey Bear Bay.  Kinda neat.  We had talked about my run-in with the Alderman and the name of the farm must have stuck because when she came back from the run, she showed me this photo.

As for the story, it is just *too* Chicago politics to believe.   From the Chicago Tribune:

A subsidiary of Carson Pirie Scott & Co. sold an interest in prime Wisconsin real estate to two of the most powerful members of the Chicago City Council while the company was earning millions of dollars from a no-bid city contract that the aldermen voted to approve.