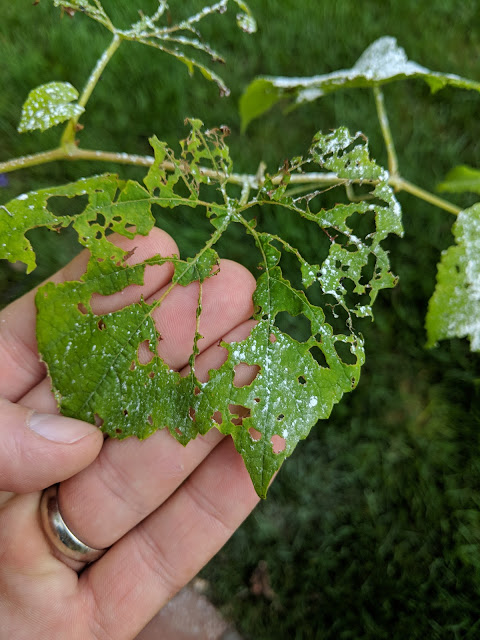 Yesterday, I posted a photo of the variety of grapevine that I planted in our container this Summer (Somerset) and mentioned that I did that just because I wanted to post a follow-up.  Today, is that follow-up.  You can see that we have been attacked by some Japanese Beetles.  They've basically skeleton-ized some of the larger leaves.

Unfortunately, they arrived when I was out of town for the better part of a week, so they got a head start.  Since then, I've tried to monitor the plants and remove the beetles everyday by hand.  I tried drowning them in soapy water with mixed results.

Turns out, the Japanese Beetle is a known grapevine.  This piece from My Grape Vine says:


The Japanese beetle (Popillia japonica, also known as the jitterbug) is one of the most visible and most destructive feeders of grape vine foliage out there.

The Japanese beetle attacks most green parts of the grape vine, but mostly feeds on young leaves in the upper part of the canopy.

If you look closely at the top photo or not-so-close at the bottom photo, you'll see that I've now taken a further step and applied some 'eight' (not Seven!) garden dust to the leaves.  It is supposed to be not-harmful to apply to vegetables and fruit and is supposed to repel the beetle.

However, since everything I've read say that it can take up to three years for the vine to start producing grapes, I'm not that worried about topical applications like this since there isn't anything for us to eat this season.  Now, my goal is to keep the vine alive and happy so it will come back next Spring and take up more of the trellis. 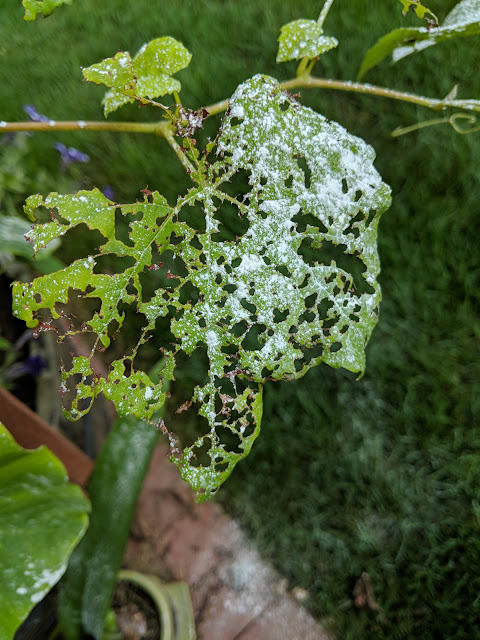