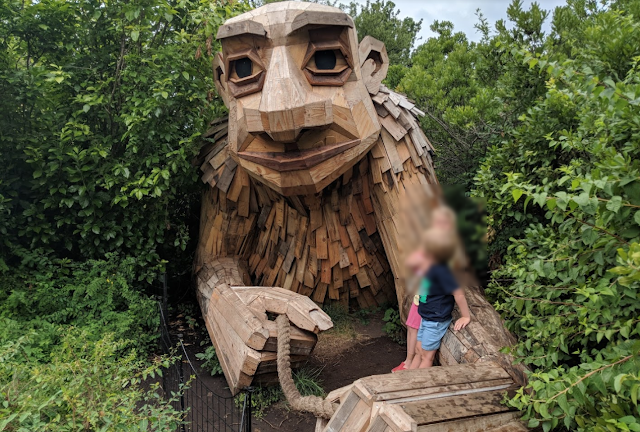 The kids *took me* to the Troll Hunt at the Morton Arboretum recently.  And it was awesome.  Like, really fun and interesting.   That's the two little ones hanging out with one of these Trolls.  this one was laying down, holding a rope that is attached to end of a 'trap'.

I say that the kids took me because they have been there to see the Trolls before and this was my first visit.

On this visit, we did the northern loop of the Arboretum and came across three or four trolls  Most of them (if you wanted to), you could mostly make out from your car.  But with a short, enjoyable hike, you could get up close to these giants and the payoff was worth it.

I was so impressed with the show and can't help but wonder how long the Trolls will stick around.  I'm hoping that they'll remain for quite some time, but the Arboretum site only discloses this:

The trolls will reside on the Arboretum's grounds as long as possible, with the expectation that they will be available for visitor enjoyment through the remainder of 2018.

The trolls were built by Danish artist Thomas Dambo and you can find out more about him/the project on this page of the Arboretum's site.   He wanted them all to be 'hidden', but the Arboretum had other ideas.  From this Chicago Tribune story:


Dambo first came out last summer. He rode around on a bike for a couple of days, he said, identifying potential locations, building the story in his mind. His initial impulse was to make all of the trolls a challenge to find and to get to, out on the many hiking paths.

“One thing that I would really like my trolls to do is try to bring people out of their safe zone in their cars and go exploring nature a little bit because when you explore such a beautiful forest as the Morton Arboretum then obviously you will understand that it's worth protecting it and saving it.

“Just in my life I've been so fortunate to go scavenging, hunting for materials, and go into the alleys and climb trees, and that's where all the good experiences are. I want to remind people that the world is so much bigger than this triangle we move in from, like, our house to our job to our supermarket and then back to our house again.”

Ahem, said the arboretum, at least a little bit. “I said, ‘OK, let me tell you about our visitors,’” Wagner said, a good proportion of whom visit primarily to drive the slow, one-way routes through the various treescapes.

So now the Morton website makes clear that: “All trolls are located between two feet and three-quarters of a mile from the nearest parking lot on a variety of path surfaces. … Five of the six trolls can be observed from your car on the main driving route.”

Still, to get close to most of them, you do have to at least take a walk.

Check out the video below for an overview of the project.  But...go see them.  You won't be disappointed.