Millers Falls Plane - One that Got Away 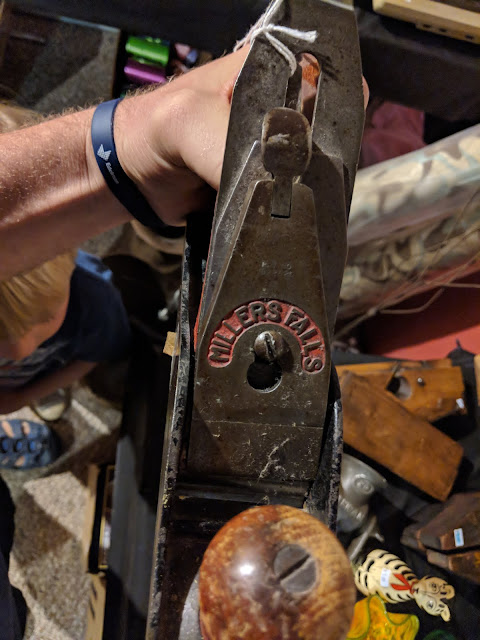 There's a few more post-worthy items that I came across at the big Estate Sale up in Twin Lakes including this Millers Falls plane.  My brother-in-law has a few vintage tools and a couple of nice planes, so whenever I come across one, I usually check it out.  Normally, if they're Stanley and less than $5, I will grab them.

This one is from Millers Falls - which I had not come across before - and they were asking $12.  So, needless to say, this one didn't come home with me.

As for Millers Falls, turns out, they were trying to make planes that were *different* than Stanley.  And that red background - behind the work mark - was part of their key difference.  From this "Old Tools Heaven" post:


When the Millers Falls Company introduced its new line of hand planes in 1929, it needed a way to differentiate its products from others already on the market. The identity problem was compounded by the fact that all of the new models were knock-offs of existing Stanley production.

The company chose to build product identity by concentrating its publicity on the new line’s flagship tools—the bench planes.

The planes were developed with an eye to creating an instantly identifiable appearance that would set them apart from the competition. The frogs were painted with a bright red enamel that contrasted sharply with the planes’ black enameled beds.

The company adopted the use of a highly polished nickel plating for the lever caps of its premium bench planes and displayed the company name on them surrounded by bright red paint.