Checking In On My Office Succulent - Fall of 2018 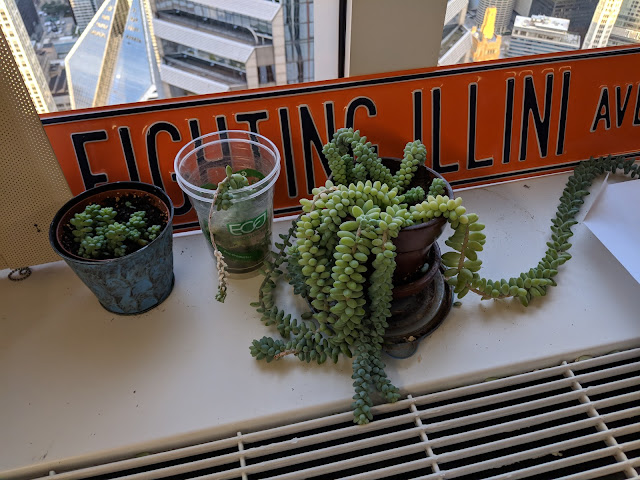 It was just a little bit over a year ago that I last posted a photo of my office succulent - a Burro's tail - that I keep on the ledge by my window in the Aon Center.  That photo is here.  And here's the post from August of 2016 - just over two years ago - that shows it in its youth.  Tracking the changes over the years shows the growth of not just the main plant, but you'll also notice in this year's version, a series of other growths.

As for the primary pot, you can compare last year to this year and see that it is still going strong with a few long shoots and a full pot.  But, you'll also note two other experiments.  The first is the container on the far left that shows a bunch of new cuttings that I took from the main plant and put in a smaller pot.  They have taken off and begun to make their own 'tails' as it were.  Also, in the center of the photo, you'll see a clear plastic cup that I've tossed some succulent bits in that broke off the main plant.  And sure enough, they've mostly rooted in the water.  They'll need to get transplanted at some point, but for now, I'm just keeping the water cup mostly full to keep them alive.

Also this year, I brought in some supplemental succulent soil and kind of 'topped off' the original plant.  After two years, the soil had dropped and was likely not providing a lot of nutrients, so I feed the plant, then placed some new soil on top.  A few months later, it has settled and I'm already thinking about putting even more soil on top.

Also, my next project is to take a few more cuttings and bring in another few small pots to begin to grow even more cuttings and maybe even some sort of plant stand to elevate the pots to truly take advantage of the 'hanging nature' of the Burro's tail.
aon center Burro's Tail office office plant plants succulent cuttings succulents transplanting