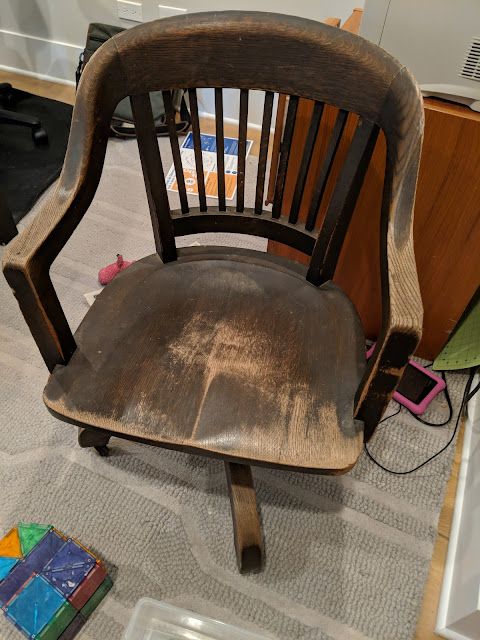 A few weeks past, I posted a photo of a couple of soda pop bottles that I picked up for my Dad at a garage sale down the street.  In that post, I mentioned that I bought a desk chair, too.  This, is that desk chair.  It isn't destined for my desk, but rather for my office as a chair the kids can sit in while they're in there with me.  The chair was priced right and didn't require any haggling, so I snatched it up and put it in the back of my car.  It is well worn, but still rocks and spins and seems to be very solid.

After I got it home, I noticed a few tags on the lower parts of the chair that tell the chair's story.

Check out the tags below.  First one says:  U.S. Department of Agriculture.  F.S.A. Farm Security Administration.  It appears that the number for inventory control has been scratched out. 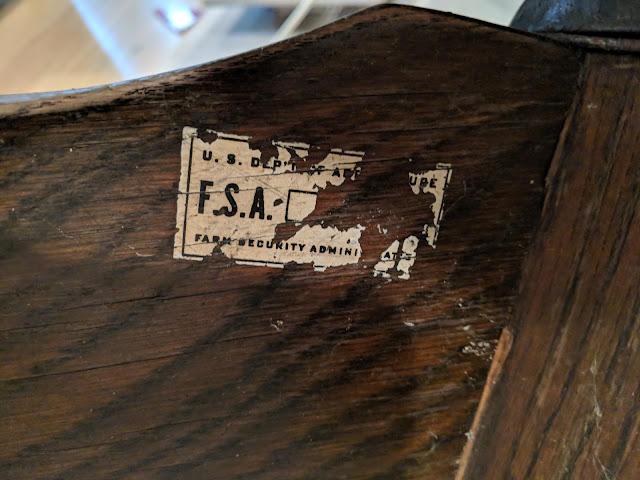 On another leg, there's another Department of Agriculture FSA tag with the letters "U" and "S" on either side of the tag. 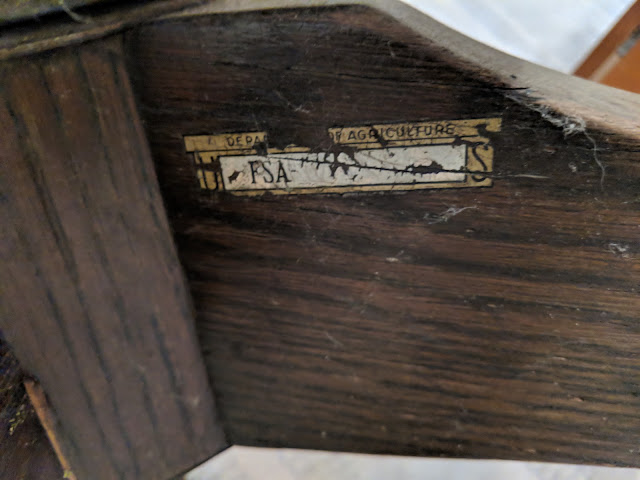 Of course, I went online to figure what exactly the Farm Security Administration is/was to see if it could help date the chair.  Sure enough, Wikipedia has the story.


The Farm Security Administration (FSA) was a New Deal agency created in 1937 to combat rural poverty during the Great Depression in the United States. It succeeded the Resettlement Administration.

The FSA stressed "rural rehabilitation" efforts to improve the lifestyle of sharecroppers, tenants, very poor landowning farmers, and a program to purchase submarginal land owned by poor farmers and resettle them in group farms on land more suitable for efficient farming. Critics, including the Farm Bureau, strongly opposed the FSA as an experiment in collectivizing agriculture—that is, in bringing farmers together to work on large government-owned farms using modern techniques under the supervision of experts.

...The FSA is famous for its small but highly influential photography program, 1935–44, that portrayed the challenges of rural poverty. The photographs in the Farm Security Administration/Office of War Information Photograph Collection form an extensive pictorial record of American life between 1935 and 1944.

The Wikipedia post also shows the end date for the FSA: Dissolved 1946.    Also, turns out the FSA was involved with the Japanese Internment during WWII.

So that dates the chair:  between 1937 and 1946.  That's interesting.   And warrants exploration.  Like was there an Illinois office?  Did this thing come from Washington DC?  How did it end up in Downers Grove?  The woman who I bought it from said she bought it from a garage sale in the Randall Park neighborhood about 20 years back.  So, it has been in our neighborhood for a while.  And now it will stay there.

But, I also have gone down the web rabbit hole around the FSA and their photography collection that Wikipedia mentions.  There's A LOT there there.  Here's the Library of Congress listing.  And, there's one photo that I think everyone will recognize that is part of the collection.   This one:

As I said, there's a lot of *there*, there.  The documentary photography was part of a government propaganda campaign and the head of the FSA eventually moved on to take the photographic project to another government agency called the Office of War Information.