Flowering Pear Tree - In the Fall?!? 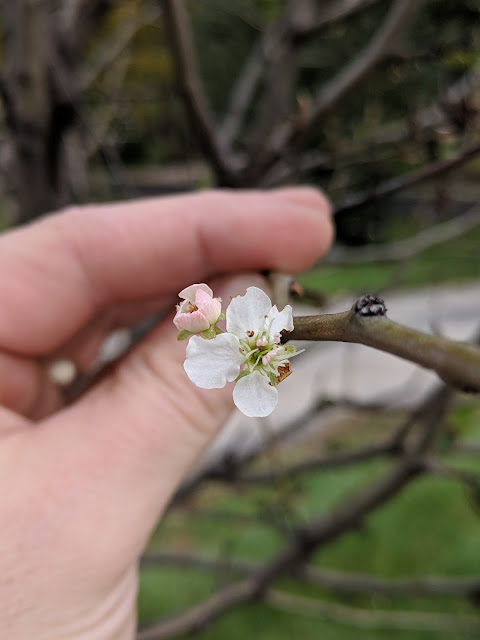 About a month ago, I posted a photo of what appeared to be 'new' growth on our struggling Chanticleer Pear Tree that we had planted out front of our house.  Here's that post that shows new green leaf growth emerging on the tree in early October.    The full history of this tree is long, despite that we've only been in our house a little bit over a year.  It starts with the first tree - a 3" caliper version of this tree - being planted before we moved in our new house in June of 2017.  That tree didn't survive the year and was ripped out and replaced earlier this year.

The new tree struggled, too.  But I worked at it.  I did some radial trenching and used a post hole digger to break down thru the clay layer to allow the tree to breath a bit.  I took a very similar route with the Bald Cypress we planted this Summer - you can see the details here.

And the tree managed to survive all Summer.  I stopped watering it all together and just monitored it for green underneath the bark.  Most of the tree was green, but it wasn't leafing out.

What I *think* was happening was that the tree was struggling to survive all Summer and began to work it's roots down to areas where it could survive.  And was putting all of its energy into survival mode.  Then, September and October hit and the temperatures dropped and it didn't need as much energy to put out leaves.  So, now it has a seasonal clock that is all out of whack.

Leading to flowers?!  Yeah...flowers!  Back in October, I posted that I was hoping that the buds that I was seeing were buds that were being set for next Spring.  But nope.  They're for NOW.  There is limited info about out-of-season blooming, but this story makes me think that the stress (they reference drought, but I'm pretty sure my problem was the opposite: over-watering) forces the tree to bloom at funny times.