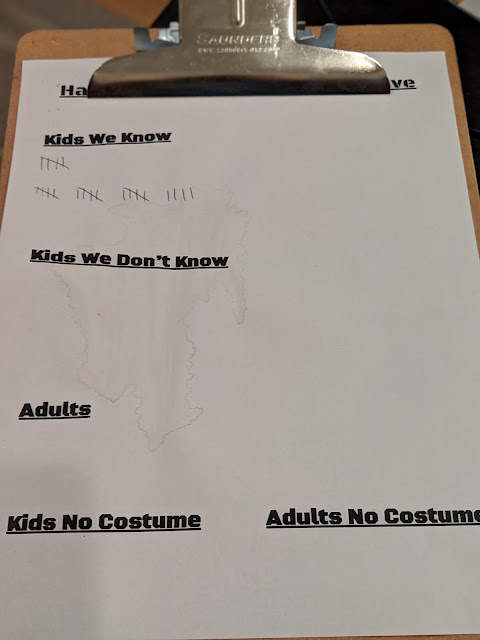 My...how the mighty have fallen.  That list above is our sad tally sheet from last night.  It only has five marks before we went out trick-or-treating and ended up with 24 total.  Oh,  and a big drink stain on it.  Twenty Four.  And that's being VERY GENEROUS by counting all the little ones that live on our block who came over to our house with their parents for a little post trick-or-treating party.  The five were kids that rang the bell and I dropped candy into their bowls/bags.  Mostly middle school kids.  The 19 others were kids who did, indeed, take candy from our bowls, but also stuck around for a while.

We then went out with the kids to hit up the neighborhood.  And we put out a bowl.  About 150 pieces of candy (based on the bag having 300 pieces... I poured in about half) in the bowl.  Set it out on our front porch.  And put our Nest camera pointing towards it.

You can see the little orange bowl just off our front door mat below:

It didn't take long for kids to come up.  Most played by the rules.  Maybe everyone, did?  I didn't see anybody dump the bowl.  But it was, alas, empty by about 500 pm

I didn't have my phone out the whole time, but Nest recorded 32 events on this camera by 445 pm including this witch and her friends.  I was probably five or ten of those events, so lets call it 25 visits to our bowl.  Average party size of three = 75 visitors. 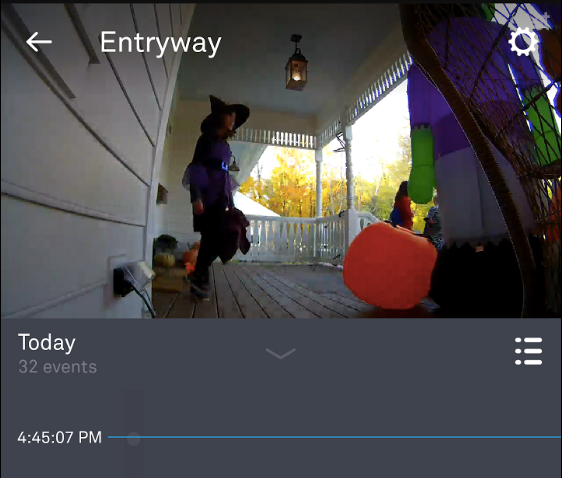 Now, say that my counting was right and I had 150 pieces in the bowl.  Each kid took two pieces - which...is about right, isn't it?

Maybe we blew thru the 150 without anyone dumping the bowl?

I'm not counting those 'potential' 75 visitors because I didn't count them myself.

Instead, I'm sticking with the 24 total.  The lowest total by far.  We don't live on Indiana Street anymore, I guess?!?!

Here's the previous totals since 2009.  The high remains 2016 when we had 347.  This year *has* to be rock bottom, right?  24 total kids.  Our two Halloweens in Downers Grove are significantly lower in terms of visits than even our lowest year of 2009 in Elmhurst.