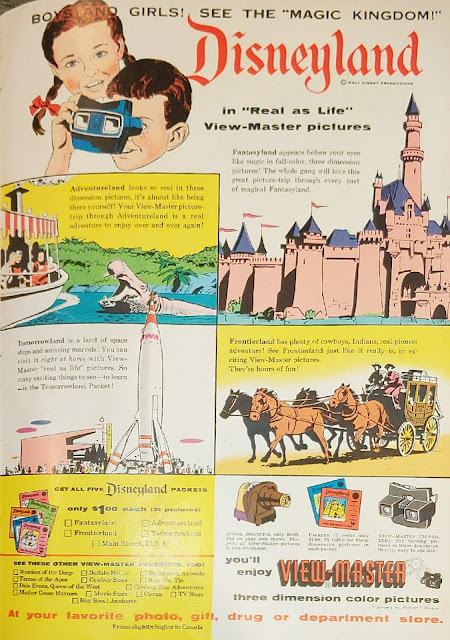 A couple of days ago, I posted a photo of #188 Walt Disney Comics and Stories book featuring Donald Duck and his nephews.  Inside the book were stories about Donald Duck, The li'l Bad Wolf, " and of course Mickey the Mouse in "The Case of the Hungry Ghost".  I haven't read any of them yet, but will get to them soon (I hope!).  In the meantime, I flipped through the book and came across the advertisement you see above at the top of this post for Disneyland "View-Master".

The photo at the top of this post is via Google's Photoscan app.  The one at the bottom of the post is just directly from my phone.  There's pros/cons with each one.  Here's a link to the photoscan version on Google Photos that is full-size that you can zoom in/around on if you want the details.

There are a few other ads worth sharing, but for now, let's focus on this Disneyland one.  This is from May of 1956 - just ten months after the July 1955 grand opening of the park.  So, this *could* be some of the earliest advertisements that a young lad would see about the park.  Kinda interesting to think about that context in reviewing the ad.

Let's break things down a bit.

First, the placement:  this is the inside of the back cover.  Disney is really good at synergy TODAY, but this shows me that they knew what they had back then.  House ad isn't on the back cover - which they could sell for a premium.  But the second best slot.

Neat that they were using that phrase all the way back then.  Now, that's exclusively something that is used inside the park in Florida.

The ad itself is for the View-Master (you remember those!?) and promotes how you can see the realms in "Real as Life" pictures.

Starting with Fantasyland then going down the list to the other four realms:  Adventureland, Tomorrowland and Frontierland. 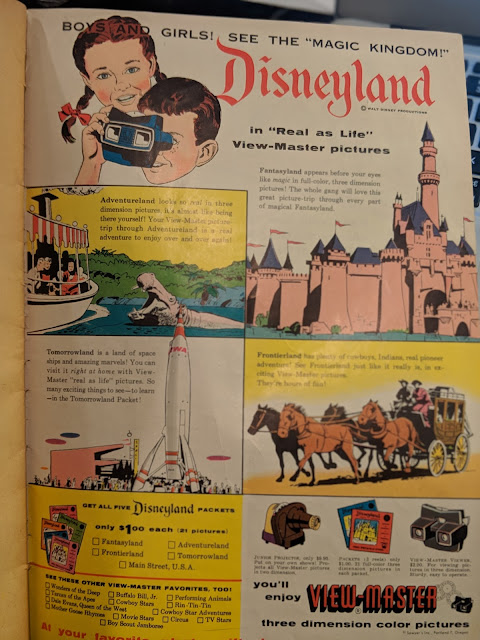