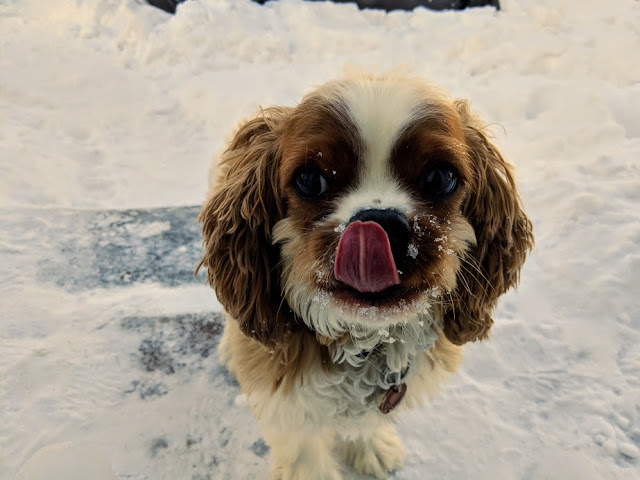 We give Lizzie her breakfast and water in the morning.  Every morning.  It is part of our routine.  I wake up, go downstairs, let her out of her crate, take her out.  Then we do a food/drink dance.  After she eats and drinks, if I'm going downtown to the office, I shuffle her back into her crate for the morning.  Actually, she runs into the crate herself.  Then, a couple of hours later when Nat and the kids are up and around, they let her out and she has run of the house.

She's different than Maisy when it comes to food/drink.  Maisy only ate and drank when you were in the room with her.  We kept her food and water bowls in my office - where she lived.  I'd fill them up every day, but some days it seemed like she would barely eat.  And only eat when we were sitting in the office together.  Lizzie on the other hand devours everything you put down.  On the spot.  That includes water that she guzzles.

So, we don't leave a ton of water out for her.  She gets it at certain intervals each day and then proceeds to guzzle it.  I've experimented by standing by and refilling her bowl and after like 10 bowls of water, she finally stops.  But it takes A LOT to stop her/slow her down.

But this Winter, we had plenty of snow.  Especially in January.  And that means that Lizzie the snow dog has a good go of sticking her moose right into the snow to eat it up.  She eats so much snow sometimes that she starts to freeze outside.  Like...literally freeze.  She forgets she is outside.  Eats and eats.  Then starts to shake.  And her paws get cold.  She does that 'lift one of her paws up' and look at me.  Like her paws hurt.  So, I grab a pair of shoes and go out and get her.

This photo you see above is one that Nat took.  Shows our little Lizzie with a face full of snow.

Let's call this 2.58 years old. (Two years and seven months)  The last time I showed her was back in November when she was 2.25 years old.  She's still wearing her 'winter coat' in this photo, but with Spring on the horizon, I'll take her in to get groomed in the coming weeks.
cavalier king charles spaniels cavaliers dogs lizzie pets snow
Location: Downers Grove, IL, USA