Nostalgia At Disney - Seeds Being Planted 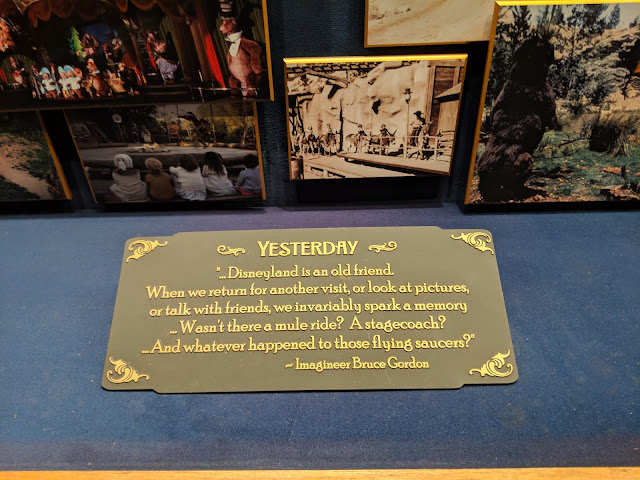 I came across this little display and sign inside of the City Hall in the townsquare at the end of Main Street USA at Disneyland Park on our trip.  It is titled "Yesterday" and speaks to the idea of nostalgia.  Written/said by Imagineer Bruce Gordon.  I had never heard of him, but he was an Imagineer who died pretty young - at the age of 56 - back in 2007.  His work includes the creation of Splash Mountain, the 1998 renovation of Tomorrowland, the Many Adventures of Winnie the Pooh, the Finding Nemo Submarine Voyage and Tarzan's Treehouse.

Some Disney purists might look at his resume and think he's, ah...associated with some terrible projects.  The 1998 Tomorrowland renovation was panned.  The Tarzan Treehouse conversion from Swiss Family Robinson certainly has detractors.  Same with the Nemo submarine voyage.  Changes to "classic rides".

But, this Mercury News piece - which ranks the best and worst Disney ride/attraction makeovers lists Nemo as a win and Tarzan's Treehouse as a draw.

And, Splash Mountain?  I mean...that's an awesome ride, right?

He also was associated with the Walt Disney Family Museum as a show producer and consultant, so clearly he was an important and well-liked part of Imagineering.

But, as for the quote above - it is all about how Disney Parks stir that notion of nostalgia in all of us.  Or at least *some* of us - like me.

And Disney isn't just passively trying to let this idea of nostalgia win you over.  They're actively seeding it.  I covered how they used a cover of Bob Dylan's Forever Young paired with vintage footage of the park from the 50's along with footage of Walt Disney himself  on the railroad to promote their 60th anniversary.  Here's that post.  And below is the commercial:


They used that version of "Forever Young" as the departing music from the World of Color show at Disney's California Adventure.  Here's the song with the little goodbye greeting at the very beginning.

And then take a look at this coffee cup or water cup with the nostalgia quote from Walt Disney himself:

"I love the nostalgic myself. I hope we never lose some of the things of the past" Walt Disney. #nostalgia #wonderfulquotes #
A post shared by David Peters (@davidmarkpeters) on Nov 29, 2018 at 8:40am PST


Down at WDW, they use other Walt Disney quotes in various ways including on signs on their construction walls.  I've covered a bunch of those including this one about wanting guests to feel like they're in a different world.  Rest of the signs are here.

They know what they're doing.  And it certainly works for a segment of the population.

This Morning Consult study has all the data about the latest big spending segment of the population - Millennials - and how nostalgia is working on them to drive demand at theme parks.  And all generations (mine included) want to see Disney do stuff from *our* childhood over the characters my kids are most familiar with:


Pluralities of all parents, millennials included, said they would prefer to attend theme parks that feature characters and worlds from movies, television shows or cartoons of their childhood over parks that host their children’s favorite characters or themes.