Pruning Our Espalier Trees - Removing the Top of Lindens 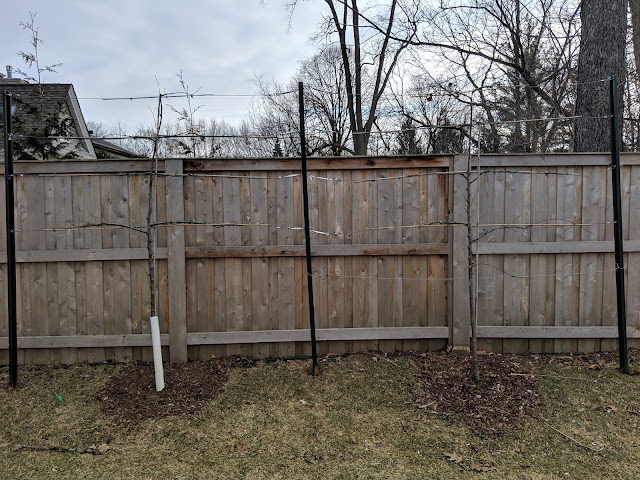 As the weather started to warm up, I was able to get out into the yard to do some late Winter pruning on a bunch of items around the yard.  I cleaned up the hydrangeas, used a new extension pruner (more on this at some point) to clip off some water spouts on trees way up in the air and even tended to this pair of Linden trees that we've espalier'd into a horizontal cordon.  Here's a post from September of 2017 where I shared photos and description of the wire setup.  The photo at the top of this post shows the state of these two trees before any pruning.  It is hard to really see all of the cordons or arms, so here's an annotated photo showing the position and lengths of the arms/limbs: 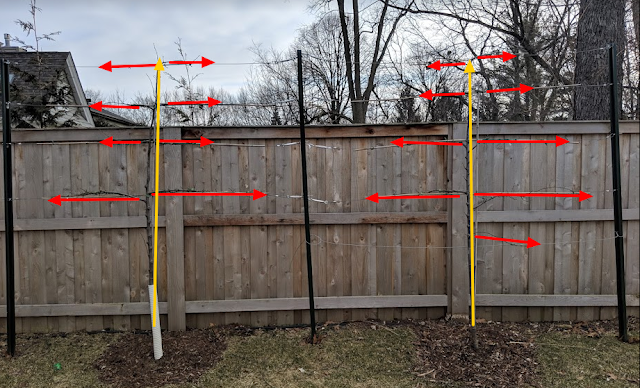 The Greenspire Linden on the left has four levels of cordons and the one on the right has what I'll call 4.5 levels.

I decided to try to prune off the top - what I found out is known as the "apical meristem" in an attempt to drive more growth into the existing arms/limbs/levels.  So, I looked at where the third arm/level was and grabbed the pruners to clip off the top from there.  It looked like this: 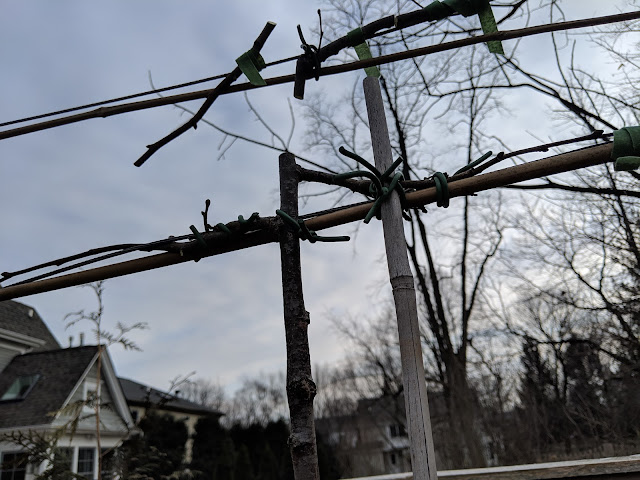 I'm going to remove the top wire and move it down to make a new level.  Either at the very bottom, where the Linden on the right has already started to have a horizontal cordon or new arm or in between the existing (full) level/arm one and two.  I also am now considering shaping the tips into a candelabra version of espalier?

The theory goes that with the removal of the top/leader, the tree will put more energy into the existing limbs.  You can see that the top cordon/limb in the photo right above is very thin and needs to get beefier.  I left a little bit of trunk above the top level of limbs to account for some die-back if it happens.

Those of you keeping track of my blog posts at home might remember this post from February of this year where I laid out the Ten things I wanted to do on my 2019 Garden To-Do List.  #7 on that list was pruning these Lindens.

That means we're off to a strong start.  1 of 10 crossed off the list.

In addition to removing the top horizontal cordon, I also went in and cleaned up a bunch of the branches that were developing.  I cleaned them up, removed any downward-pointing ones and then loosened all the wires that I had in place.  Quite a few of them were constricting the growth of the tree and now that the cordons have firmed up, I don't need as many to keep the structure in place.