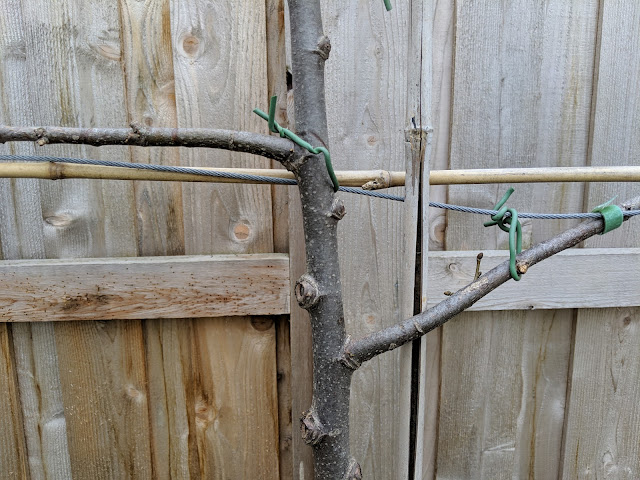 Four weeks ago, I posted a series of photos showing how I had pruned both of the Greenspire Linden trees that we have espaliered into a Horizontal Cordon.  We went from four levels down to three and then restrung the wire to support a new fill-in fourth Cordon.  When removing the top Cordon, I cut what is technically called the Apical Meristem in an attempt to redirect some of the growth this season to the existing Cordons with the goal of beefing them up and then thinking about how we might be able to turn the tips up into a Candelabra shape.  (Scroll down in this post to see the different espalier shapes including a Candelabra.)

A few things to call out though:

First, in the photo above, you can see that we have one misaligned Cordon level.  On the left, the limb is coming out about four or five inches higher than the limb on the right.  I've trained the one on the right *up*, but there is currently this misalignment.  Is it a deal-killer?  I don't think so.  Especially as the Cordons thicken up.

But the other issue is more unsettling.  Last season, during the heavy growth, I used some padded garden wire to train the Cordons to their wires and bamboo poles.  In a few situations, I wrapped them too tightly and didn't afford the room for the tree to grow.  And what happened is this: 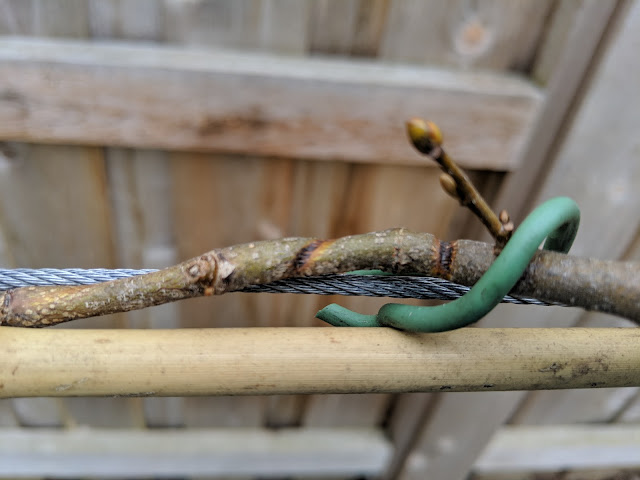 See the damage from the wrapped wire?  It constricted the limb.  As soon as I realized it this Spring, I removed all of the supports are re-wrapped the limbs in a much looser fashion.  You can see it in the photo above.  I took the wire that was constricting this limb and now you can kind of make out all the air/space between the limb and wire next to the injured portion.

Here's another look at a different injured section. 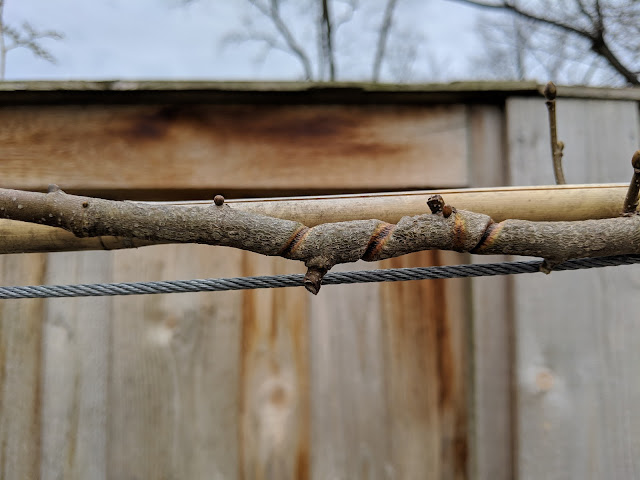 I'm hoping that I caught it early enough and that the tree limb or Cordon won't grow like popeye's arms with big growth in between the elbow and wrist.  Imagine seeing the tree continue to grow in between these lines?  I'm hoping it will totally recover and that the Cordon will just beef up around these marks/lines.