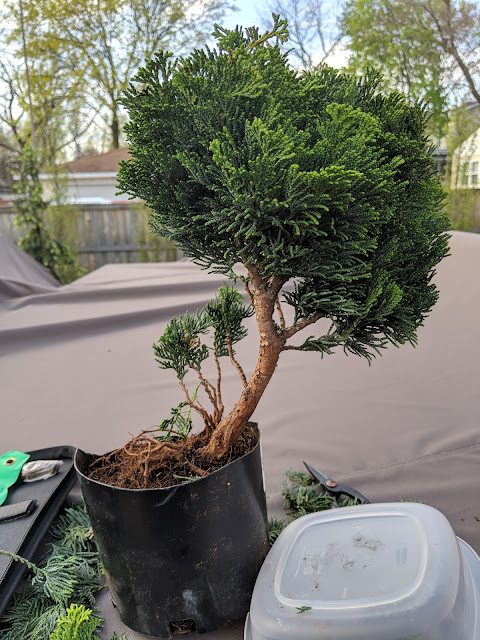 Back on May 7th of this year, I shared a couple of photos and talked about my initial excitement of giving the art of bonsai a shot with a piece of nursery stock that I picked up at Home Depot for $10.  It is a Cypress Hinoki and had one large(ish) trunk that seemed to have decent trunk taper, very little reverse taper and priced so cheaply that if I killed the poor thing, I wouldn't be that upset.

In that initial post, I talked about how I was following some of the Mirai Bonsai Basics video directions and started with the roots and trunk.  More recently, I moved on to the next few steps and began to try to prune the Cypress into a bonsai of sorts.

I know that every article you read talks about how you aren't supposed to prune more than 30% of the tree at any one time and that pruning an evergreen like this Cypress is best done in the late fall when it the tree is heading to dormancy.  But, I couldn't, umm, help myself.  I dove right in. 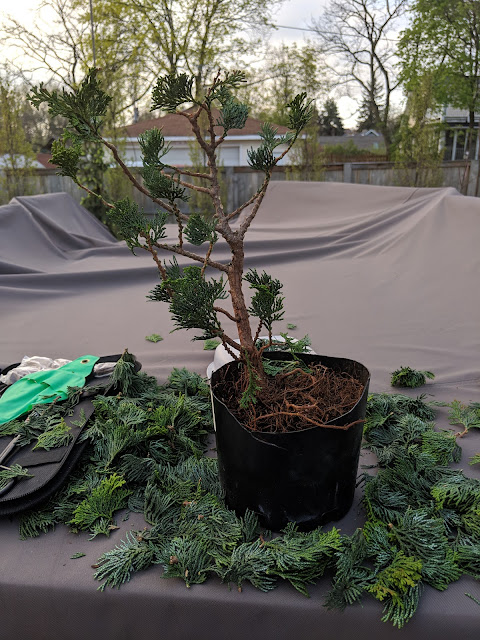 I began by pruning off all the dead and under-developed needles.  And quickly got lost in the process.  In the photo above, you can see all the carnage.  That's a lot more than 30%, right?  Once I was in, I figured I'd go all the way and try to learn a few things along the way.  Despite the education screaming at me about being patient, I figured I'd test the limits of nursery stock like this and also see what I could learn by trimming needle pairs all the way down to their extremities.  When I was done, it looked like this: 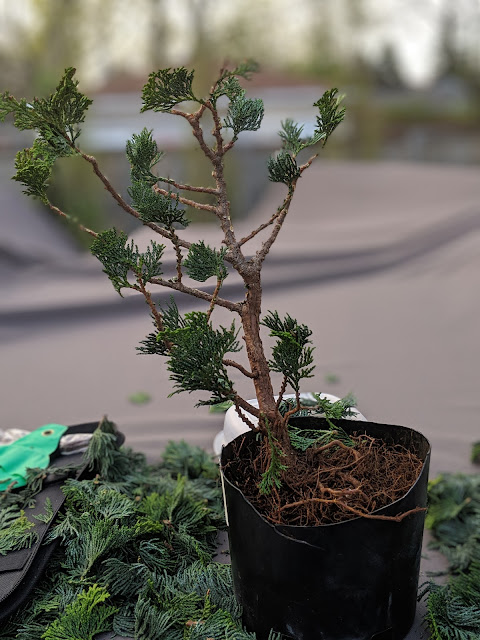 By no means anything a seasoned bonsai expert would even call a bonsai.  But, in doing this, I have begun to understand some things.  In addition to seeing if a severe pruning like this can be weathered, I also wanted to put some of the knowledge I had gained into play.  See those lower limbs down near the base of the trunk?  Desirable bonsai has a nice root flare and has a taper to the trunk.  That means that the part of the trunk nearest to the ground should be the fattest section.  By leaving on this young limbs down near the bottom - and letting them grow (for now) - I'll be working to grow (or fatten) that part of the trunk.  Ultimately (again....if this thing survives), these limbs down below where the tree splits and begins to curve are going to be sacrificed and pruned off.  But, for now, they're going to help beef up the trunk.

I read over-and-over that bonsai is not about having and owning a bonsai tree.  It is about the process to grow a tree.  And that process takes a long time.  Years.  Tens of years, even.

I pruned this thing to give me something to look at and learn from.   I made plenty of mistakes.  But, I know I did *some* things right and will see if I can keep this one alive.  But, more importantly, I've learned that bonsai isn't about having one tree.  It is about having a bunch of trees.  All at different stages of their lives. All needing care and tending to from time-to-time.  When you get that kind of scale, bonsai becomes something you do regularly.  With one tree, it is something one does once or twice a year.

So, what'd I learn?  The answer in terms of this Cypress Bonsai isn't clear.  But what is clear is that I'll be heading back to the garden center or nursery to buy another tree to start another bonsai journey this weekend.