Setting Up A Three Bin Composter 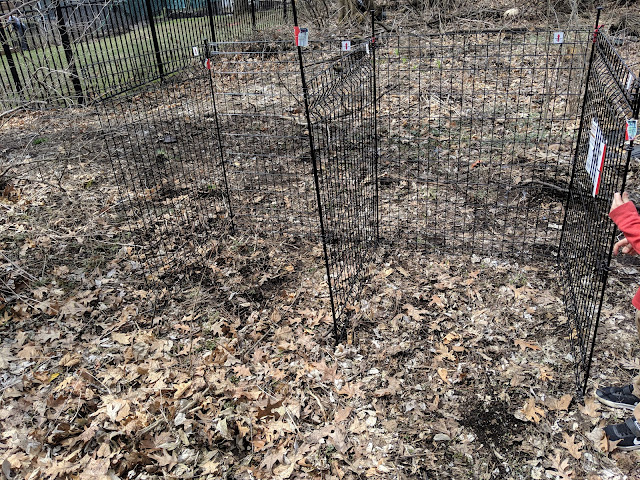 We've been composting in our yard since 2009 when we bought a Lifetime Compost Tumbler from Costco.    We've been filling it each Fall since (except for the two seasons we lived in Equation Boy/Man's house in Elmhurst) and by late Summer, we have a nice batch of black gold.  In the ten years that I've been composting, I've learned that composting is a 'batch process'.  Meaning....you have to build up a full 'batch', get the right mix of nitrogen and carbon and then wait for it to cook.

That 'batch process' I'm talking about is the big part of why our current setup (with a single large tumbler) isn't working hard enough for us.  What we currently do is during the Spring cleanup and all through the early part of the Summer, I collect material and just kind of pile it up next to the tumbler.  Why?  Why not *in* the tumbler?  Because it is still FULL from the previous batch.

About June or so, after we've had six or more weeks of warm weather, the 'batch' that I put in the previous season is finally ready.  And we get some beautiful black gold like this from 2015.

I dump that compost out of the tumbler and use it in the garden.  Wonderful!

Then, I take as much of the pile of stuff (grass clippings, dirt, weeds and what-have-you from around the yard) that is next to the tumbler and toss it in the tumbler.  Then...I wait.  And wait.  For the leaves to fall.  I then pick up the first set of leaves and stuff as many of them in the tumbler that can fit and call it a day.  I *then* and only then have a batch.  The nitrogen material from the Spring and Summer.  And the carbon material from the leaves in the Fall.

The batch cooks for a few weeks remaining in the Fall, but it isn't as hot as it was in the Summer. Then Winter comes and the whole thing slows down.  I turn the tumbler when I can, but because it is all the way in the back of the yard, I don't get it it very often.

Come Spring, the weather warms up, the mix gets going and we're back at the beginning of the cycle.  That's where I am right now.  I am cleaning up the yard, have tons of nitrogen-filled material - and frankly....a bunch of carbon from late-falling leaves - but nowhere to put them because the 'batch' from last season hasn't cooked enough and isn't quite ready.

That's where this new fence system you see at the top of this post comes in.  I found this 'no dig' fencing on sale at Menards.  It is 3'8" tall by 3' wide.  I bought ten panels which is enough to make three distinct pens or bins that I've loosely based on THIS product from Gardeners Supply - that if the panels from Menards weren't on sale, might be more competitively priced.  The reality is that you can do this with any kind of fencing you have on hand.

We have a large easement at the back of our property.  There's about 40 to 50 feet of 'no man's land' between our fence and our neighbor behind's fence.  This is where I set up this bin system.  You can see on the ground that it isn't manicured and the leaves that fall just settle into the ground.  This is also the area that I call the "Critter Superhighway" because it is a linear run of undisturbed, non-fenced area that runs from the Barth Pond on the south all the way up to the tracks on the north.

The setup you see above is just two bins.  But, trust me....there's panels to make a third.

With three bins, you get to live your best batch life.

Bin two:  storage of Carbon (leaves!) for when you want to make a batch.

Bin three:  storage of Nitrogen (greens) for when you want to make a batch.

So, now I can have 2 'batches' cooking at any one time.

One in the tumbler that I *hope* I can start earlier in the season because I've been able to collect the materials from the previous Fall.  And the other in the 'batch bin' - Bin one that will cook all Summer.

A proper, fully evolved compost system of my dream would be a double set of double tumblers.  But that's like $1K of compost bins vs. under $100 of fencing and my current tumbler.

The downside of bins vs. Tumbler is that I'm going to be on the hook for turning and aerating the pile in Bin one vs. just simply spinning the tumbler once a week or so.  But, now I'll have double or triple the compost AND....importantly....I'll be able to continue to collect material WHILE I'm doing the cooking.  With a goal of having the 'batches' ready each year in the Spring when I start to put vegetables in the ground.
compost compost gardening diy gardening leaves
Location: Downers Grove, IL, USA